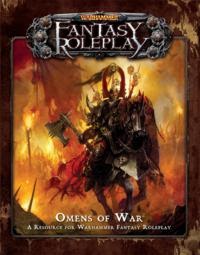 FFGWHF16
WHFRPG: Omens or War
$49.95 SRP
Blood for the Blood God! Omens of War is a brutal new supplement for Warhammer Fantasy Roleplay, focusing on warfare in the Old World and the daemonic power of Khorne.
With new martial options for player characters such as new careers, rules for mounted combat, new fighting styles, and over 50 new Action cards, Omens of War is an invaluable resource for players. For Game Masters, Omens of War introduces the Ruinous Power Khorne, his daemonic minions, and insights into the Blood God’s desires and plans. New Severe Injury rules threaten characters with grisly fates and debilitating wounds, making combat even deadlier.
Finally, Omens of War also features a complete adventure set amidst the fires of battle. War is coming.
Expected in June 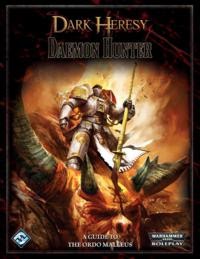 FFGDH16
40KRPG: Dark Heresy: Daemon Hunter
$39.95 SRP
The Inquisitors of the Ordo Malleus and the Space Marines of the Grey Knights are the chosen warriors of the God- Emperor, tasked with keeping humanity from falling into darkness. They hunt tirelessly to rid the Imperium of their collective prey: Daemons.
Daemon Hunter is a powerful resource for any Dark Heresy campaigns featuring the servants of the holy Ordo Malleus of the Inquisition. With information and background on the Ordo Malleus in the Calixis Sector, the Daemon hunter’s trade, and the Malleus armory, Daemon Hunter is the perfect companion for players and GMs alike who wish to craft exciting campaigns for Dark Heresy. Learn the ropes of Daemon hunting with an extensive look at the origins and status of the Ordo Malleus. Then, take up arms as an acolyte in service to the Ordo Malleus by becoming a Banisher, taking the fight to the Daemons. Also, learn the tools of the trade by studying the Malleus Armoury, which presents new tools for every tier of character.
Finally, Daemon Hunter includes everything players and GMs need to include Grey Knights into their Dark Heresy campaigns! 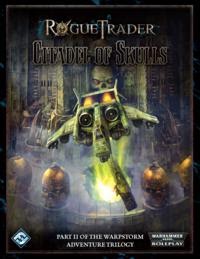 FFGRT07
Rogue Trader: The Citadel of Skulls
$24.95 SRP
On the hunt to discover the cause of vanishing settlements and increased xenos sightings, you and your fellow Explorers are thrust on a perilous journey. A great beast has awakened from beyond the edges of the Koronus Expanse, hungering to fulfill its dark purpose. Before you and your fellow Explorers can attempt to seek it out and ultimately destroy it, you must uncover what and where it is. Finding the answer is a nearly impossible undertaking, pitting you against an infamous pirate lord blessed by Chaos.
Citadel of Skulls, the second adventure in The Warpstorm Trilogy for Rogue Trader, can be played as a standalone adventure or connected to the events introduced in The Frozen Reaches. Prepare to attempt the ultimate heist: stealing a priceless artifact from the vault of Karrad Vall, the Chaos Reaver known as the Faceless Lord. No sane person has ever risked entering the Faceless Lord’s inner sanctum, let alone stealing from him...until now. Plot your course through Vall’s dark cathedral, past quivering slaves and brutal enemies, bloody chambers, and the ossuaries that give the Citadel its name. And once you reach the Casket of Secrets you’ll meet “the Archivist.”
An epic adventure of exploration, combat, and acquisition of wealth, Citadel of Skulls is a suspenseful and thrilling journey. Will you be able to withstand the voyage?
Posted by ACD Distribution at 5:52 PM