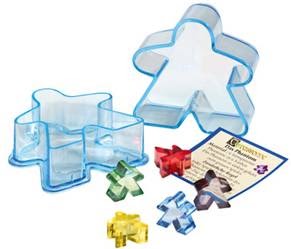 This expansion to Carcassonne includes 6 new translucent followers, 1 for each player color and rules for the use in the Carcassonne game. The set will be released with 6 different colored transparent meeple-shaped boxes to choose from.
Each player gets that phantom of its color. In the course, a player may place this phantom as a second follower on the board. In this way, he may place two followers on two different features on the same tile. When a player gets back the phantom, he may use it in a later turn as well. The phantom can also be used alone and always counts as a regular follower.
Expected in May 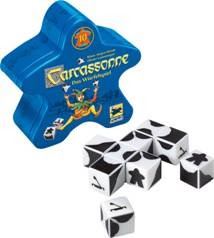 RIO438
Carcassonne: Dice Game
$17.50 SRP
2-5 Players
Ages 8+
10 Minutes
In the Carcassonne dice game, the players cleverly use dice roles try to build closed cities as large as they can - the bigger, the better.
They said it couldn't be done – oh, wait, no one ever said that. In fact, gamers have been predicting the release of this title for at least five years, and now is the time.
As part of the tenth anniversary celebrations for the Spiel des Jahres-winning Carcassonne, publisher Hans im Glück and designers Klaus-Jürgen Wrede and Olivier Lamontagne are releasing Carcassonne: Das Würfelspiel, a quick-playing dice game that will allow players to build cities faster than ever before. The game includes nine special dice, a pencil and a block of scoresheets packaged inside a meeple-shaped metal container.
Posted by ACD Distribution at 9:56 AM

Email ThisBlogThis!Share to TwitterShare to FacebookShare to Pinterest
Labels: april, board, carcassonne, dice, expansion, may, rio