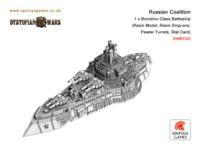 Bristling with turrets and broadsides, the Borodino Class Battleship is a truly fearsome vessel. Its ablative amour plating forms a hulking tiered formation that gives this ship an intimidating profile. With the ability absorb withering hails of fire; this industrial nightmare will forever haunt the ambitions of anyone who dares cross the path of the Russian Coalition. 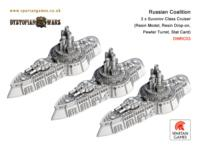 Russian Coalition Commanders use the Suvorov Class Cruiser as a harsh, unbending anvil against which their foes are crushed. Armed and armored like their battleship counterpart, they use their increased speed to hold the flanks, funneling the enemy into the core of the battle-line with the threat of their formidable turrets. 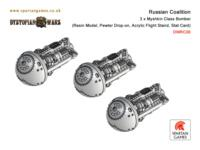 A testament to the exceptional prowess of Russian Coalition engineers, the Myshkin Class Bomber presents a highly unique attack. A final bombing run will culminate in the detachment of the aircraft's heavily reinforced nose from the main body of the craft. The sturdy metal shell will then plummet from amid the clouds to crash through the enemy's decks, causing incalculable devastation. 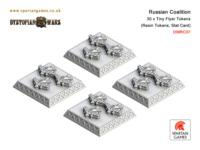 Russian Coalition Tiny Flyer Tokens are swept-back biplanes that feature oversized engine compartments and an overly-large fuselage. As such, they stand true to the Russian's status as an industrial powerhouse, and are a menacing addition to the skies above the battlefield. 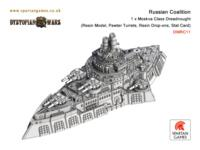 The Moskva Class Dreadnought is a mammoth machine that boasts almost unfathomable strength, ensuring the Russian Coalition are able to expand their influence even further afield. The strategy of this daunting ship is simple - use its powerful, forward facing weaponry, shrugging off what pitiful resistance its opponent can muster, and forcing the for to flee before its uncompromising might. 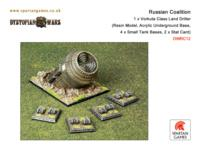 One of the most exciting aspects of fielding the Russian Coalition is the multitude of unorthodox tactics that you can employ. Perhaps the most fascinating weapon at your disposal is the Vorkuta Class Land Driller. This ironclad machine is a key addition to the White Army, able to penetrate your foe's defenses and leave them trembling with fear. 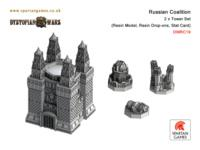 The grandeur of the Russian Coalition and the scale of its influence is epitomized in its mighty Tower Set. Monstrous, unforgiving guns will obliterate anyone foolish enough to believe they have a chance of toppling it. Whether utilizing the communications, shield or gun tower drop, this bastion of war is sure to be pivotal to the success of your campaign. 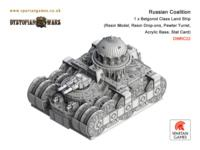 The Belgorod Class Land Ship forms the majority of the Shock Armies' heaviest engines. Running on massed banks of wheels, the Belgorod is a veritable rolling fortress, able to cover all possible angles of attack. Designed for aggressive operations, it is capable of wading into the midst of enemy armored formations and then blasting away at targets on every bearing. 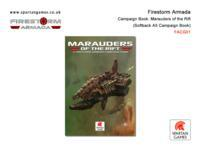 Firestorm Armada Campaign Guide 1: Marauders of the Rift Marauders, pirates, raiders, corsairs, call them what you will, this full color Firestorm Armada Campaign Guide delivers to you page-after-page of thrilling information to take your space combat games to a new level. Six new factions are introduced, including the audacious Oroshan Imperium, along with statistics for numerous space vehicles, mercenary fleets, new in-game mechanics, a full campaign background and tabletop scenarios for you to game.

Posted by ACD Distribution at 3:34 PM