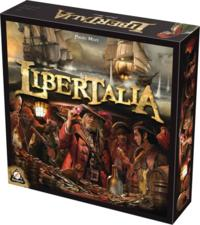 Outwit the plans of competing pirates over three campaigns while using the same crew cards as your comrades! Will you be able to make the most of the abilities of your characters at the right time, or will you have the loot snatched from under your foot by a wilier pirate than you? Dive in and prove your knack for tactics! The game takes place over three campaigns where players try to amass riches by looting ships. Looting is a dangerous activity, as players need to avoid collecting cursed relics. At the end of the game, the richest player is deemed the winner! The box contains: 1 game board; 6 pirate dens; 6 score tokens; 6 crew tokens; 180 character cards (30 for each player); 1 score track; 50 booty tiles [4 chests, 6 jewelry, 10 goods, 6 Spanish Officers, 6 sabers, 8 treasure maps, 10 cursed relics]; 13 doubloons of value 10; 10 doubloons of value 5; 45 doubloons of value 1, rules. 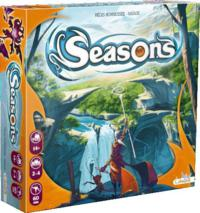 Assuming the role of one of the greatest sorcerers of the time, you will be participating in the legendary tournament of the 12 Seasons. Your goal is to raise the most victory points by gathering energy, summoning familiars and magic items. If you amass enough crystals and symbols of prestige, you will become the kingdom's most illustrious mage. Optimize the cards through skilful combinations, using the seasons wisely to access the energies of crystals and become the new Archmage of the kingdom of Xidit. In a first phase, select 9 power cards at the same time as your opponents. Do the right choices, because they will determine the rest of the game. Acclimatize to the season to make the most of the actions proposed by each roll of the dice! Collect energies, invoke magical and familiar objects, and collect enough crystals, symbols of prestige. The time is now magician! The box contains: 1 game board; 1 year counter and 1 season wheel; 8 Library tokens; 8 special Sorcerer capacity cards; 16 sorcerer tokens; 4 individual game boards; 20 seasons dice or 4 different colors; 1 crystal track; 60 energy tokens – 15 of air, water, fire, and earth element; 100 power cards (numbered from 1 to 30); and 40 extended power cards (numbered 31 to 50). 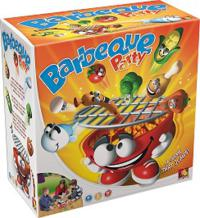 A game full of sizzling fun! Veggies to grill, and some chicken and hot dogs too! But to win you need 3 of each. Pick a card, it will tell you what you need to grill next. When you pick that card again, it means that it is ready and you need to remove it… BUT… you better be careful, because this friendly barbeque doesn’t like to be tickled… One false move and BOOOMMM and your meal will be late! •Game can adapted for little kids. •Children will enjoy the funny faces on all of the pieces of food. •Allows children to improve fine motor skills through play. Features The box contains: 1 Barbeque and grill 16 pieces of food 18 cards 1 grilling tongs 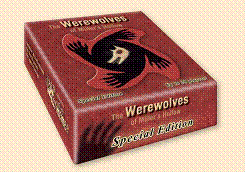 Werewolves celebrate 10 years of success! To celebrate this anniversary, “Lui-même” editions and the authors of Philippe des Pallières and Hervé Marly have concocted a special limited edition of this mythical game. For those who are new to the game, the goal is for the Werewolves to devour the townspeople at night and to conceal their identity during the day. However, the Werewolves need to take care as there are 11 special characters who have special talents that are determined to unmask them with the help of the villagers! The game includes 29 sturdy cardboard cards - including a “scapegoat” card to give players somebody to blame all mishaps on. This Special Edition includes high quality game cards, a refreshed design, five of the characters from Werewolves New Moon and new illustrations. And a neat Sheriff’s Badge with a black cord to tie around the neck of the proudly elected official!