A Song of Ice and Fire Campaign Guide is your complete resource on George R.R. Martin’s Westeros. In its pages you will find a complete history of the Seven Kingdoms, from the days of the First Men to the reign to the Targaryen kings and the War of the Usurper. Its chapters cover the lands from the North to Dorne, the Iron Islands to the Stormlands, the Free Cities and beyond. You’ll also find descriptions and game stats for the major players of the Game of Thrones, from the Starks and Lannisters to the Baratheons and Tyrells. This new edition revises and updates the original book, making it the indispensable guide for fans of the novels, the TV show, and the roleplaying game. 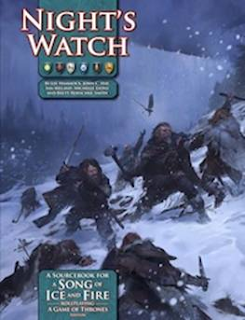 Though the Great Houses and their vassals play the eternal Game of Thrones, there are some who do not. The men of the Night's Watch guard the immense and icy Wall, built in the ancient days of Westeros to hold back the terrible things of the Long Night. Once a mighty cohort of brave knights and lords who gave up everything to protect the Seven Kingdoms from the predators of the Far North, the Night's Watch is now a rag-tag band of thieves, murderers, and those who ran afoul of the political machinations of their enemies. When the wildlings stir on the other side of the Wall, and the cold winds rise once more, will they be enough to save Westeros? Night's Watch gives you everything you need add this once noble order to your A Song of Ice and Fire Roleplaying chronicle. It includes rules for playing men of the Night's Watch and wildlings alike, as well as new information about the mysterious Others. Pray, men of the green lands, for Winter is Coming!
Posted by ACD Distribution at 9:00 AM

Email ThisBlogThis!Share to TwitterShare to FacebookShare to Pinterest
Labels: a song of ice and fire, august, green ronin, nights watch