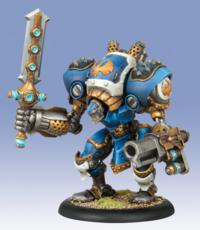 Avenger/Centurion/Hammersmith—Cygnar Heavy Warjack (plastic) Caspian engineers developed the hulking Centurion to rival the size and strength of Khador’s warjacks. Its increased armor and heavy shield makes it one of Cygnar’s most durable designs, and its mighty piston spear can easily pierce the hulls of enemy warjacks. The Hammersmith swaps out shield and spear with massive twin forge hammers meant to flatten anything in its path, while the Avenger features a stun blade and a groundbreaking seismic cannon. Representing a step forward in Cygnaran technology, the seismic cannon fires sophisticated projectiles that can unleash a localized earthquake upon impact. This box set contains three color stat cards and one multi-part heavy warjack plastic model (PIP 31074). Included are all the components to assemble one of three heavy warjack variants: Avenger, Centurion, or Hammersmith. A player may field any number of these heavy warjacks in a Cygnar army. SPECIAL NOTE: PIP 31074 contains the same Mk II stat cards as PIP 31025 and PIP 31039. The model in this box represents the same figures as those PIPs in the game. However, the model in PIP 31074 is a new sculpt and therefore looks different from the models found in those PIPs. In addition, this model is plastic rather than metal. PIP 31025 and 31039 will no longer be available from Privateer Press beginning August 1, 2012. 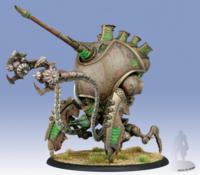 Kraken—Cryx Colossal (resin and white metal) The Kraken ranks among the most terrifying necromechanikal fabrications ever loosed upon the mortals of the Iron Kingdoms. With surprising agility for its size, a Kraken can quickly maneuver to take advantage of any situation on the battlefield. As it rises from the depths, its hellblaster cannon delivers devastating payloads supported by bursts from its flayer cannon to cut down infantry. The Kraken’s long tendrils erupt like steel serpents in the midst of formations, tearing apart warjacks and grasping victims to fuel its vile hunger. The Kraken colossal comes in a box (PIP 34050) and includes a colossal wreck marker. A player may field up to two Krakens for each warcaster in a Cryx army. 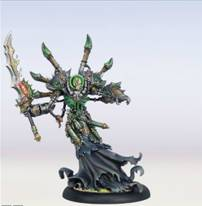 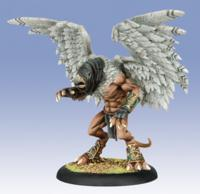 Scarsfell Griffon—Circle Light Warbeast (plastic) Griffons are predators that combine the sinewy grace of great hunting cats with the ferocity of birds of prey. Druids of the Circle Orboros have long tended griffon fledglings far from civilization and picked out those best suited to their needs. In the Scarsfell griffon they have found a hunter with a remarkable aptitude for stealth and ambush, one able to dive from great heights to surprise even well-camouflaged prey far below. The Scarsfell Griffon light warbeast comes in a box (PIP 72061). A player may field any number of Scarsfell Griffons in a Circle Orboros army. 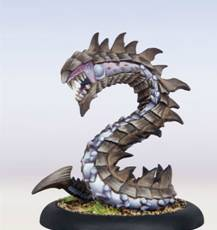 As the hosts of Everblight’s legion advance, they are preceded on the ground by the fearsome naga. These draconic horrors first spew caustic venom upon their victims before closing to tear the wounded apart with fanged maws. Though seemingly simple in form, the naga are in truth complex spawn representing Everblight’s genius 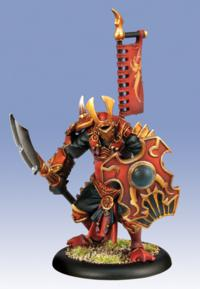 Cyclops Brute—Skorne Light Warbeast (plastic) The tenacious and vicious nature of the cyclops brutes makes them singularly responsive to training, and the skorne rely on them to hold the flanks of formations or stand vigil over tyrants. Armed with towering shields and massive polearms, brutes constitute a virtually insurmountable threat on the battlefield. Their unique vision focuses on evading blows, and they can extend this power to those they protect. The Cyclops Brute light warbeast comes in a box (PIP 74067). A player may field any number of Cyclops Brutes in a Skorne army. 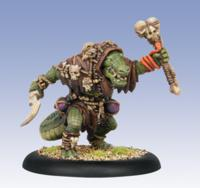 Gatorman Witch Doctor—Minion Gatorman Solo (white metal) Each witch doctor is a powerful mystic who lives and breathes the foul necromantic arts that are his birthright. Life and death are two edges of the same bloody knife to the witch doctor, who often sees his allies as nothing more than tools of battle to be moved between those two states as required. Amid the morass of combat he gathers the vile totems required to power his spells, tearing the fleshy trophies from the carcasses of vanquished foes. Raising his sacral blade aloft, the witch doctor utters sibilant incantations that impel the huge beasts he controls in a wave of scaled death. The Gatorman Witch Doctor solo comes in a blister (PIP 75040). A player may field two Gatorman Witch Doctors for each warlock in a Minion Gatorman, Circle, Legion, Skorne, or Trollblood army.

Heap is the madcap game of vehicular mayhem where the player who cobbles together the most outrageous vehicles wins! Each player plays a gang of crazed goblins that have traveled across the post-apocalyptic wasteland in broken-down vehicles to converge on a gigantic heap of long-discarded scrap—perfect ingredients for demented automotive modification. In arena-style bouts, each gang selects its champion driver to storm the heap and duke it out for the best parts to upgrade their vehicles. Be first to trick out your vehicles and dominate the final pileup to rule the heap!