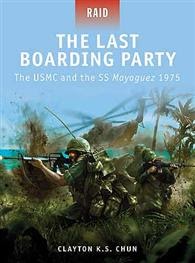 OSPRAID024
The Last Boarding Party
$18.95 SRP
Just two weeks after the close of the Vietnam War, communist Cambodian Khmer Rouge elements seized the S.S. Mayaguez in international waters. Believing they had to act quickly, United States Marines boarded the ship, only to find the crew had been removed. They then launched an assault on a nearby island where they believed the crew had been taken. Instead of a quick strike against a limited foe, the Marines encountered major opposition and were quickly pinned down. With large numbers of Cambodians closing in all around, the a desperate firefight developed as US forces tried to extract the Marines. This book recounts the bloody struggle on Koh Tang island, as a badly botched hostage rescue turned into a desperate evacuation. 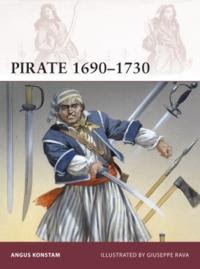 OSPWAR158
Pirate 1690-1730
$18.95 SRP
This book describes the life of a pirate of the early 18th century - the heyday of the 'Golden Age of Piracy'. It charts the way these men (and a few women) were recruited, how they operated, what they looked like and what their prospects were. In the process the book attempts to strip away many of the myths associated with piracy, to reveal the harsh realities of life beyond the normal bounds of society. The book draws on decades of research into the subject, and pulls together information from a myriad of sources, including official reports, contemporary newspaper reports, trial proceedings and court testimony, last words on the scaffold, letters, diaries and period scandal sheets. Other sources include archaeological evidence, and relevant objects and artifacts from museum collections on both sides of the Atlantic. In other words the book will reflect the last word in pirate research, making it beneficial to both the serious pirate historian and the novice apprentice. 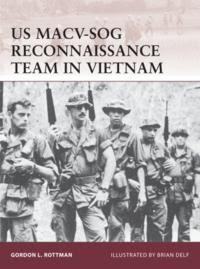 OSPWAR159
US MACV-SOG Reconnaissance Team Vietnam
$18.95 SRP
In 1964 Military Assistance Command, Vietnam, activated a joint unconventional task force known as the Studies and Observation Group--MACV-SOG. As a cover its mission was to conduct analysis of lessons learned in combat involved all branches of service. SOG's real mission was to conduct covert strategic reconnaissance missions into Laos, Cambodia, and South Vietnam as well as sabotage and 'Black' psychological operations. Ground, air, and naval assets were employed to insert, collect, extract, and otherwise support these operations. Drawing on detailed, first-hand accounts of the experiences of the service, including action on operations, this book will shed light on one of the most crucial units of the Vietnam War. 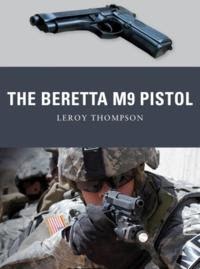 OSPWPN011
The Beretta M9 Pistol
$17.95 SRP
In 1990 the Beretta M9 replaced the venerable Colt 1911 as the main pistol of choice for the US Army. At the time the decision was controversial particularly because it was perceived that a smaller caliber weapon such as the Beretta would lack the necessary stopping power and range in comparison to the .45 caliber Colt. The situation was not helped by the rumor that the adoption of this Italian designed pistol was in exchange for the creation of US missile bases within Italy. Nonetheless, the Beretta, although not a perfect pistol, has since proved many of its distractors wrong with widespread use in Iraq and Afghanistan. Written by a leading pistol expert who currently trains US Special Forces in the use of this weapon, this book is an honest appraisal of the successes and failings of the Beretta design. The volume traces the Beretta designs, which preceded the M9 as well as its use on the battlefield, including the impact it has had on close combat training due to the larger magazine capacity. It also details the adoption of the Beretta by US law enforcement agencies and the impact this has had. This is a fascinating history of a classic pistol and its future use.
Posted by ACD Distribution at 1:00 PM