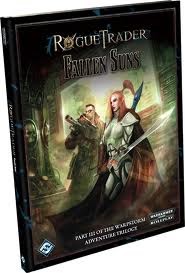 FFGRT08
Rogue Trader: Fallen Suns
$24.95 SRP
A powerful force has awakened from its slumber somewhere deep within the Hecaton Rifts, and if left unchecked it will spell certain doom for the denizens of nearby sectors. As this ancient evil threatens to destroy both the Koronos Expanse and the Calixis Sector, can you and your fellow Explorers learn the truth of its mysterious origins?
Fallen Suns is the third and final installment in The Warpstorm Trilogy for Rogue Trader!
A lost Eldar Craftworld has begun a dark voyage of death and disaster, and only the Rogue Traders of the Koronus Expanse stand in the way of its rampage. Journey into a perilous realm of madness and ancient hate; from Footfall to the Serpent’s Cradle and beyond, you must make common cause with allies old and new if they are to survive. The fate of the Koronus Expanse hangs in the balance!
Fallen Suns can be played as a standalone adventure, or as part of the gripping series of adventures that began with the events of The Frozen Reaches and continued through Citadel of Skulls.
Posted by ACD Distribution at 10:11 AM