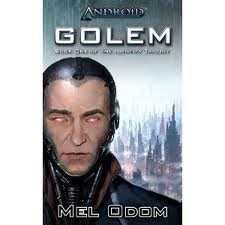 FFGNAD02
Android: Golem (Novel)
$8.99 SRP
Set in the dystopian future of the popular board game Android, Golem, the first novel in The Identity Trilogy, delves into the world of science fiction and noir, and examines what it means to be both a bioroid and a good person.
When a talented New Angeles Detective wakes up in bed with a woman whose name he can't recall, this seemingly harmless mystery indicates a much larger problem. After all, as one of the few bioroids in the New Angeles Police Department, Drake 3G12RC isn't accustomed to forgetting... or even sleeping. But his personal issues are forced to wait when he and his human partner Shelly Nolan are assigned a high profile murder investigation–one that will change his world.
The wealthy CEO of IdentiKit, a successful android manufacturer, has been found dead in his hotel room. Now, what begins as just another murder in downtown New Angeles will quickly escalate into a tangled web of intrigue, love, and betrayal, as Drake and his partner work to solve this brutal crime before the killer strikes again. Drake’s investigation will lead him through the darkest corners of a conspiracy that reaches up the Beanstalk and out to the bustling industry of Mars... then right back to the woman of his dreams.

FFGNAH04
Arkham Horror: Dance of the Damned
$8.99 SRP
When a cursed artifact is stolen and the thief disappears, the race to locate him will force two unlikely heroes into a search neither wants a part of.
Miskatonic University librarian Daisy Walker is plagued by the missing gap in her memory. Nameless dreams hint at a long-forgotten nightmare, a horrific incident that occurred upon her arrival in Arkham. It is a memory better left lost, but when her estranged friend Annabel reenters her life with tales of being shadowstalked, Daisy must delve into her dark past to find the awful truth.
Her fate will soon intertwine with that of Tony Morgan, a bounty hunter faced with a contract with a secretive, untrustworthy corporation to find the thief. His seemingly simple job will prove far more dangerous as his pursuit is impeded by syndicate bosses, a growing cult seeking to awaken ancient powers, and a strange bandaged man.
While Morgan’s shady employer works to cover its twisted agenda, these characters will travel through New York, Kingsport, and Arkham until their troubled journey leads them into the midst of eldritch horror... and face to face with living nightmares.
Dance of the Damned is the first novel in The Lord of Nightmares Trilogy based on the Arkham Horror board game. The suspenseful ride found within its pages will excite fans of H. P. Lovecraft, macabre tales of danger, and well-written, intense thrills.
Posted by ACD Distribution at 1:00 PM