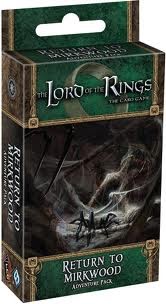 FFGMEC07
LotR: LCG:  Return to Mirkwood
$14.95 SRP
After a long and difficult hunt, the heroes of Middle-earth have captured Gollum and now escort their prisoner back to King Thranduil’s palace in Mirkwood. There, Gandalf the Grey hopes to interrogate the wretched creature for the information he suspects may keep the One Ring out of the Dark Lord’s clutches. But the journey back won’t be easy!
The sixth and conclusive Adventure Pack in the Shadows of Mirkwood cycle, Return to Mirkwood puts your heroes in the difficult position of escorting Gollum through some of the darkest and most dangerous locations of Mirkwood forest. New predators stalk through the forest, drawn by Gollum’s tantrums. Return to Mirkwood expands the card pool for The Lord of the Rings:
The Card Game with 60 new cards, including a challenging new Quest, a new hero, and three copies each of new attachments, allies, and events. 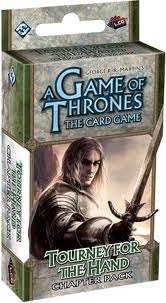 FFGGOT78
GoT: LCG: Tourney for the Hand
$14.95 SRP
Tourney for the Hand is the first pack in the A Tale of Champions cycle, and is inspired by the great tournaments of Westeros.
This Chapter Pack features 60 fixed cards (3 copies each of 20 unique cards) for A Game of Thrones: The Card Game, and introduces two new keywords: melee and joust. These exciting elements create thrilling new deck-building opportunities and strategies for A Game of Thrones: The Card Game.
Featuring new versions of favorite characters like Arya Stark, Ser Jaime Lannister, Knight of Flowers developed especially for the new environment of A Tale of Champions, as well as brand-new characters like The Knight, Dorea Sand, and Meera Reed (designed by 2010 Castle Stahleck Champion Andrea Gualdoni), Tourney for the Hand has plenty to interest A Game of Thrones: The Card Game players, both new and veteran. 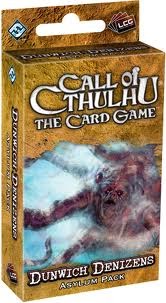 FFGCT15E
CoC: LCG Forgotten Lore: Dunwich Denizen
$14.95 SRP
Lunatic Sorcerors and the grotesque abomination the Dunwich Horror stalk the lonely hillsides of rural New England and the forbidden libraries of Miskatonic University.
Dunwich Denizens is the sixth and final classic Asylum Pack of the Forgotten Lore cycle for Call of Cthulhu: The Card Game. Based on “The Dunwich Horror,” Dunwich Denizens brings to your tabletop the abandoned farms, mist-shrouded hillsides, and eerie characters of one of Lovecraft's most chilling works of horror fiction.
It reintroduces three copies each of 20 different classic cards to Call of Cthulhu: The Card Game, and incorporate the most recent errata. The sleepy hamlet of Dunwich hides horrors beyond imagination. Guard your sanity! 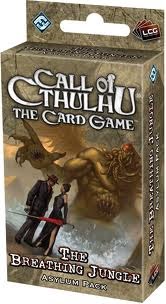 FFGCT49
CoC: Ancient Relics The Breathing Jungle
$14.95 SRP
The Great Old Ones and those who would oppose them continue to hunt powerful relics in The Breathing Jungle.
With this third Asylum Pack in the Ancient Relics cycle for Call of Cthulhu: The Card Game, players will discover the power of new items that disappear and resurface throughout human history. This expansion cycle is based on the theme of the global influence of the Ancient Ones and their cults and moves the action from H.P. Lovecraft's dread-filled New England to the wider world. While the Great Ones strengthen their global reach, investigators, criminals, and cultists wield ancient artifacts and invoke powerful curses.
This sixty-card Asylum Pack (three copies each of 20 cards) takes your game out of New England to the rainforests of Mesoamerica. Find hidden cultists and forbidden sacrifices as the story shifts to eons old locales in The Breathing Jungle. 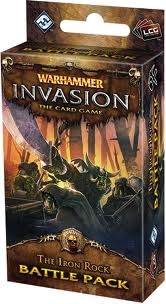 FFGWHC25
WH LCG: Invasion: The Iron Rock
$14.95 SRP
The Iron Rock is the third Battle Pack in The Capital Cycle for Warhammer: Invasion The Card Game!
With half of its cards devoted to the warmongering greenskins, The Iron Rock is an invaluable Battle Pack for players of the stunty-smashin’ Orc horde. Not an Orc player? Fans of other races will also find a variety of useful tactics, units, and support options. While a Blessing of Asuryan shines down upon the High Elves’ greatest mages, the vile Beastman Shaman feeds on the corruption of his allies. Meanwhile, the Bretonnian Black Knight engages in some offensive questing, and the Burial Mound gives the forces of the undead a new source of power!
The Greenskin horde is gathering under a banner of war, and unless they are stopped, their Waaagh! will leave the Old World in ruins. Prepare for the onslaught!
Posted by ACD Distribution at 6:03 PM