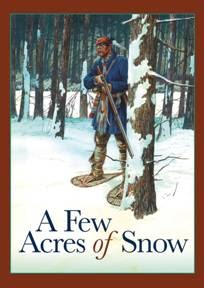 TRG4003
A Few Acres of Snow
$55.00 SRP
2 Player Game
Ages 12+
60+ Minutes
‘A Few Acres of Snow’ is a two player game about the struggle between Britain and France for control of North America, fought during the seventeenth and eighteenth centuries.
A war fought at the edge of two mighty empires. For over one hundred and fifty years Britain and France were locked in a struggle for domination of North America. Thousands of miles from their homes, settlers and soldiers were faced with impenetrable forests, unpredictable American tribes, and formidable distances. Despite these obstacles they were able to engage in bitter warfare, with the British ultimately taking the prize of Quebec. A Few Acres of Snow is a two-player game that allows you to recreate this contest. You can change the course of history by your decisions.
A Few Acres of Snow takes an innovative approach to the subject, using cards to represent locations and manpower. As the game progresses you add to your selection of cards, increasing the range of actions available to you. There are many strategies to be explored. How quickly should you build up your forces, do you employ Native Americans, what energy should be expended on your economy?
A Few Acres of Snow ™ contains:
• mapboard
• 110 Cards
• 15 Gold Coin
• 15 Silver Coin
• 2 Player Aid Cards
• 73 wood pieces
• Rules Book
Posted by ACD Distribution at 1:07 PM

Email ThisBlogThis!Share to TwitterShare to FacebookShare to Pinterest
Labels: a few acres of snow, mayfair, october