New from Wizards of the Coast! Dungeons & Dragons Products! The original Dungeons & Dragons boxed set was published by TSR, Inc. in 1974 and was the very first roleplaying game. The introduction of D&D changed gaming and pop culture forever, reaching millions of players and created a legacy that has inspired countless games, movies, and television shows.

Each booklet features a brand new cover while the interior retains nostalgic original art. These contents, along with a set of 10 polyhedral dice, are packaged in an engraved illustrated wooden storage case that’s perfect for displaying in a distinguished game room. 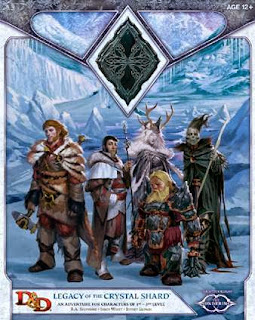 Legacy of the Crystal Shard is an adventure for character levels 1-3 set in the fan favorite Icewind Dale region of the Forgotten Realms. Players must face an evil that was once defeated but has risen again to threaten the Ten Towns. The adventure is authored by popular writers and designers R.A. Salvatore, James Wyatt, and Jeff Ludwig. The adventure can be played using rules for 3rd Edition (v.3.5), 4th Edition, and the D&D.

Second adventure of the Sundering, shaping the future of the Realms! The Sundering is a major story event impacting the Forgotten Realms and Legacy of the Crystal Shard puts players directly into the fray. Fans of D&D can not only take part in the events of the Sundering by playing adventures, but the actions that they take can permanently change the course of history and help shape the Realms forever.

Email ThisBlogThis!Share to TwitterShare to FacebookShare to Pinterest
Labels: dungeons and dragons, november, wizards of the coast