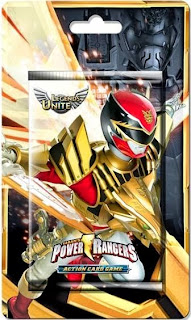 Rangers across the universe come together to battle evil in the newest series for the Power Rangers Action Card Game, Legends Unite! The world has been slowly overtaken by evil, and rangers old and new combine forces to battle to push back this new challenge! Newcomers such as rangers from Alien, Operation Overdrive, and Turbo join the fray, featured together with the same series of rangers, and creating unlikely pairings with other series’! With unexpected additions to the rangers, including spirit rangers from Jungle Fury and the powerful, US only Titanium Ranger, evil stands no chance of defeating good!

Blister Contains:
10 Cards per pack
Total of 100 cards to collect

15 Blisters per Display
Posted by ACD Distribution at 10:51 AM