New from Dyskami Publishing Company! Upon a Fable Products! 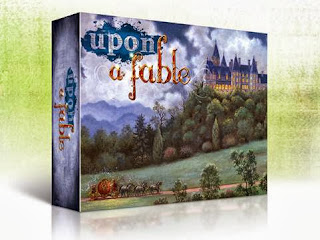 Upon a Fable is a Euro-style “gateway” strategy board game where players assume the roles of grand rulers in the fairy tale lands, and during the nine game rounds the rulers seeks to expand their realms, fortunes, and influence. At the end of the game, the player with the highest point total is the winner and declared High Emperor of the Fables!

Upon a Fable features familiar game mechanics (worker placement, resource acquisition, card drafting, and hand management) combined together with in a fun, new way to appeal to both veteran players and novice gamers. A must-have pick for your game night collection! 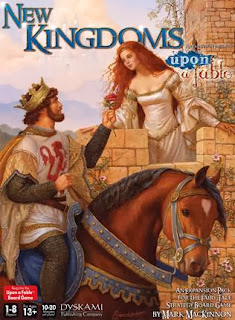 Two new and growing kingdoms have recently been discovered in the land of the Fables and can explore the fairy tale realms in a single game. In addition to the extra game boards, player boards, and game tokens in this expansion, you’ll also find over 100 new game cards, including two new card types: Enchantment cards that allow you to disrupt your opponents’ strategies while defending your own, and Ever After cards that mimic game board spaces and earn you magical treasures each round.

When combined with the Upon a Fable base board game, the New Kingdoms expansion adds even more excitement and fun that’ll keep your players coming back to the table again and again! Push your Upon a Fable board game to the next level with this magical mega-expansion pack! 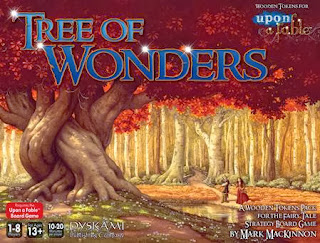 Add a little enchantment to your Upon a Fable board game by upgrading its components with over 170 wooden game tokens for that distinct Euro-style game feel. Seemingly crafted from the magical Tree of Wonder in the heart of the fairy tale lands itself, these durable wooden tokens replace the cardboard pieces from both the Upon a Fable base game and the New Kingdoms player expansion. A charming and beautiful addition to your Upon a Fable game that will evoke the majesty and power of fairy tale stories right on your gaming table!

Email ThisBlogThis!Share to TwitterShare to FacebookShare to Pinterest
Labels: dyskami, november, october, upon a fable