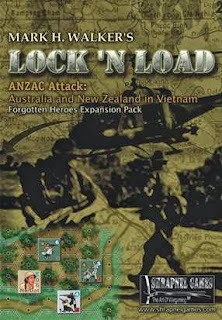 Now it’s time to step into the action again, this time with the military forces from Down Under in the first official expansion to Lock ‘N Load, ANZAC Attack.

ANZAC Attack, adds Diggers and Kiwi units to the Allied side. You’ll get a full range of units, including squads, half-squads, medics, leaders, and the heavy metal of Centurion tanks. It also provides the Lock ‘N Load player with new NVA and VC units (including T-55 tanks), and new USMC units involved in the war of hearts and minds.

Besides the eight ANZAC scenarios players can also try out two new USMC scenarios, and two focusing on the ARVN. 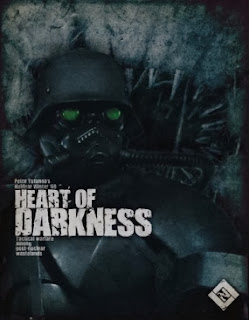 First there was the white light, and then everything melted away. And then there was silence. The war ended in 1946 with the nuclear annihilation of the Third Reich but all was not lost, for many German units took shelter in underground vaults where they continued to live, train and develop new weapons. The Reich, oblivious of the climatic, technological and political changes inflicted by more than twenty years of nuclear winter, emerged in 1968 under Himmler’s guidance only to find the Fatherland, a barren land now known as the Zone, surrounded by the NATO military and populated by mutants and a mysterious army of elusive beings fighting under the sign of the Black Hand.

It is now 1969. A year has passed since the Reich began its struggle, only to have met a stiffer than anticipated resistance from the Black Hand, their war beasts, and the far too powerful NATO force. The German war machine's bold impetus has been bogged down and turned into a fighting withdrawal as men, equipment and food levels have dwindled to critical levels. To make matters worse, a somber cloud looms over the Germans as Himmler, the Reich’s ruthless commander, has been bedridden by a peculiar illness. Feeling that his time may be nearing, Himmler decides to reveal that the relic recovered from the Holterberg monastery during the previous year’s campaign may represent the vaults’ only hope for survival and the answer to Germany’s future.

Heart of Darkness: Nuklear Winter ‘68 Expansion introduces the characters, individuals with unique backgrounds and motivations, employing powerful skills, capable to further boost the effectiveness of the platoons they’re attached to. Entering the fray is a new guild of unscrupulous, well equipped and perfectly Zone adapted mercenaries ready to shed blood for those willing to pay the most for their brutal services. Still, nothing compares to the horrific creatures lurking in Magdeburg’s radioactive shadows, an army of nightmarish creatures marked with a White Hand emblem nearly identical to the infamous black one. Despite the shock, this encounter with the darkness may very well shed some light on the truth behind the Zealots and their origins.