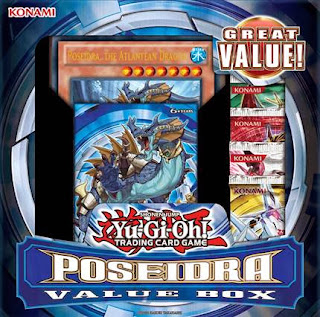 Lead the kingdom of Atlantis to reclaim its ancient glory! The Poseidra Value Box hands you all the tools you need to get started or evolve your current Deck to new levels. Use the included booster packs to further your Deck into the watery depths. With all the forces of the Atlantean army at your command: infantry, archers, cavalry, even a mighty Sea Dragon, how can you lose?

* One pack of either Storm of Ragnarok, Extreme Victory, or Generation Force. Contents may vary.

Duelists will also want to pick up this second offering of Shadow Specters because of this booster set’s great synergy with prior and upcoming releases. Shadow Specters has plenty of cards designed to build upon themes such as Vampires, Noble Knights, and even Monarchs!

Posted by ACD Distribution at 5:43 PM