New from Pendelhaven Games! Fate of the Norns! 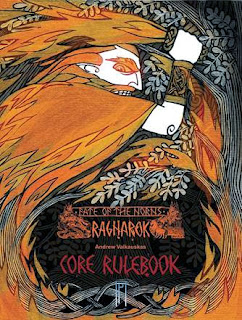 Deep in the throes of Fimbulwinter, Viking heroes rise to the challenge to stem the dark tide that has engulfed Midgard. The sun and the moon have been devoured and the worlds on the cosmic tree Yggdrasil have been cloaked in a penumbral shroud. The gods are reinforcing Asgard for the coming fury of the giants. The war cry has echoed throughout every corner of the world: will you heed the call?

Fate of the Norns: Ragnarok Core Rulebook is an all-inclusive game that will allow you to create customized characters who will embark on an epic saga. You will partake in a visceral and tactical combat system that rewards team-play and good strategy. Using the innovative Runic Game System, you will spin the tale of heroes and epic feats in a hostile world.

What you’ll find in Fate of the Norns: Ragnarok:
·         A role-playing game based on Viking sagas and folklore
·         A deep and engaging world with limitless possibilities for adventure
·         All rules needed to play the game, designed for 2-8 players
·         Mystical runes (included as printout and also available in semi-precious stone sets) for a game driven by the Runic Game System – no need for dice!
·         A choice of 15 different archetypes specializations for your character
·         A host of fearsome adversaries
·         A myriad of powers, spells, and skills that bring the characters and denizens to life 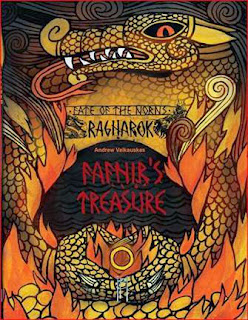 The sun and moon have disappeared from the sky. The worlds on the branches of the cosmic tree Yggdrassil have grown dark and cold. The gods and giants are on the brink of war. Mankind has descended into anarchy.

Fafnir’s Treasure is a standalone Fate of the Norns: Ragnarok saga that will bring 2 to 6 players deep into the dark age of Ragnarok. They will be engaged by the emissaries of the gods, and must avoid perils both known and unknown to find the most wondrous treasure of all – the legendary hoard of Fafnir the dragon!

Fafnir’s Treasure uses the “light” game rules of the Runic Game System (RGS) and a set of pre-generated dwellers so you can experience the full fury of Fate of the Norns: Ragnarok with nothing more than your imagination.

·         Game-driven by the RGS system: no need for dice, just a set of mystic runes (included as printout)
·         A customizable adventure that can play out in several different ways
·         A breathing, living setting for the remote outpost of Evingard, brought to life with stories and denizens
·         Five pre-generated adventurers who can be personalized in a simple and user-friendly way for first-time players 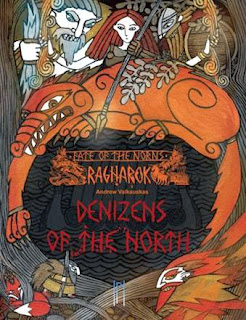