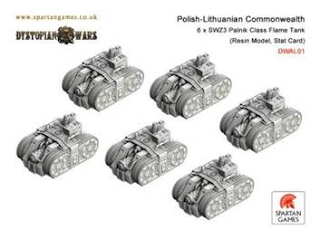 Most of the surfaces present on the unforgiving SWZ3 Palnik Class Flame Tank include menacing grilles and heat sinks intertwined with sinuous pipes and boilers, making for something that seems more of a smelting plant than a war machine. But a war machine it is – a medium armored tank whose firepower is quite literally firepower. 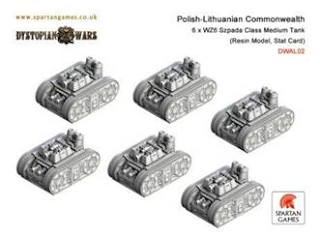 The Polish-Lithuanian Commonwealth is one of the great survivors of the world’s nations. Whilst they lack the resources to build Land Ships of their own, they make up for this with a strong force of fast and furious WZ6 Szpada Class Medium Tanks. They are devastating machines of war built to impress, and have proved an invaluable addition to the Tsar’s war effort. 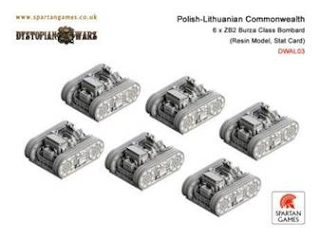 Even though it almost disappeared from the map several times in history, the Polish-Lithuanian Comonwealth’s fighting spirit has never been extinguished. Its armies, including the brutal ZB2 Burza Class Bombards, were built around the famous Legions of Winged Hussars, and practice a form of fast-moving, hard-hitting mechanized warfare. 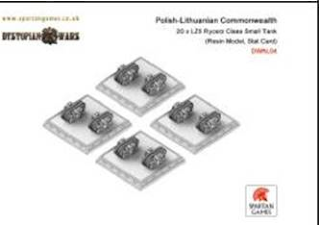 The Polish-Lithuanian Commonwealth has, for centuries, had to fight hard for its very existence. It would not have achieved this feat so successfully had it not been for the development of sophisticated vehicles such as the LZ5 Rycerz Class Small Tank – resilient, battlehardened terriers that will continue to prove indispensible for many years to come. 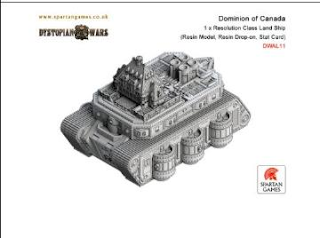 Canadian military formations run the gamut from infantry-based forces to fully equipped armored regiments. The arsenals at Toronto are capable of turning out full-sized Land Ships to standard Britannian patterns, and the shipyards are capable of servicing vessels of all sizes. The intimidating Resolution Class Land Ship is the powerhouse of the Dominion of Canada’s impressive military force. 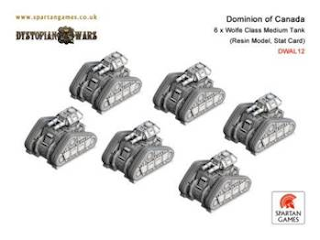 In size the largest of Britannia’s overseas Dominions, Canada has proven to be a valuable ally to the Kingdom of Britannia in its many tribulations around the globe. In the years since the end of the Prussian Wars, Canada has grown in importance as an industrial power in its own right, able to produce devastating machines such as the powerful Wolfe Class Medium Tank. 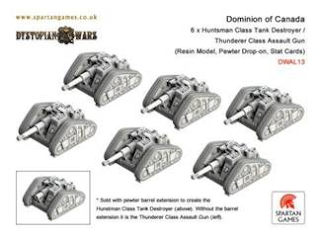 The Dominion of Canada continues to rise as an industrial power, with factories and arsenals springing up around Toronto, Halifax and other major cities in the east of the Dominion. Two of the major achievements of this industrial movement are the unique and mighty Huntsman Class Tank Destroyer and Thunderer Class Assault Gun, extremely aggressive members of Canada’s ever-growing military division. 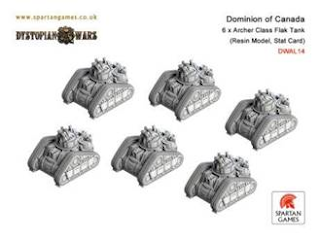 The Archer Class Flak Tank is covered in Flak turrets, bristling with skyward barrels. Imagine the terrifying scene of massive flak barrages streaming into the sky in almost haphazard directions, raining utter chaos and destruction upwards towards the flying machines above. No one can escape its wrath! 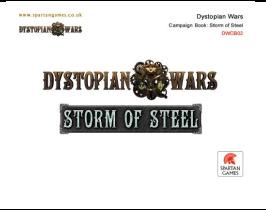 Invasion and retaliation shake the great powers and their allies as the World War explodes in Northern Europe! Storm of Steel is the second Campaign Book for Dystopian Wars and within its pages we massively develop the history of the world, play out military campaigns, expand on the great commanders of the period, offer exciting scenarios and provide new game rules to enhance the current rule set. It is a must for all military commanders. 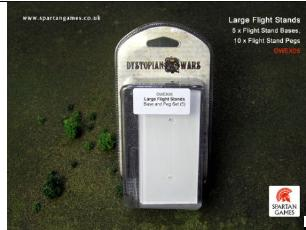 With the Base and Peg Set, you will never be short of Flight Stands for your models. These Large Flight Stands, most synonymous with Large Flyers, will prove to be a very useful addition to your modeling kit. 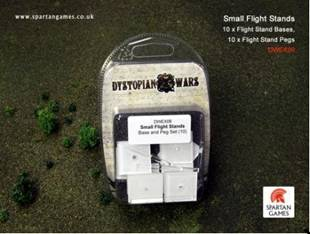 With the Base and Peg Set, you will never be short of Flight Stands for your models. These Small Flight Stands, most synonymous with Small Flyers, will prove to be a very useful addition to your modelling kit. 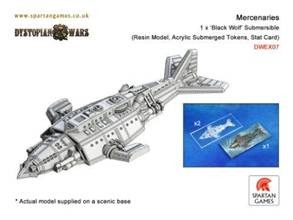 Captain Vladimir Nikonov is what many call a criminal, but he thinks of himself more akin to a pirate of old. He has no allegiance to any nation, and will, for the right payment, bring the full, deadly force of the ‘Black Wolf’ to a military engagement. A veteran of the Russian Coalition naval forces, Nikonov rose quickly through the ranks, and soon became the chosen Captain to command the latest technological achievement of the Russian Coalition. 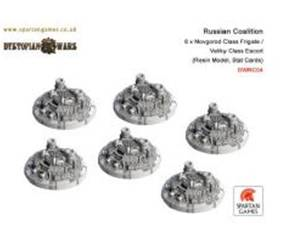 The Novgorod Class Frigate operates in a radically different fashion to the majority of frigates around the world, boasting a curious circular hull that affords it unmatched maneuverability. The rest of your fleet can gain from this advantage too as the Veliky Class Escort, with its powerful main turret and ack ack batteries, protects your larger ships. 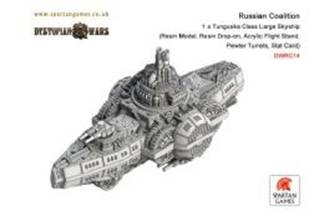 The White Army’s Air Force utilities scientific contraptions built from the knowledge passed on from Antarctica and combines it with the cruder technology of the Russian Coalition. This potent blend of mad ideas resulted in the creation of the Tunguska Class Large Skyship, a flying machine built to ensure that the Russian Coalition remains as much a threat in the air as they are at land and sea. 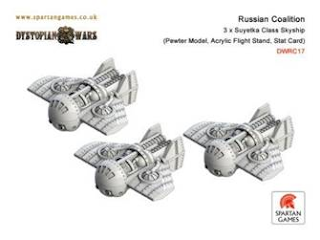 There is perhaps nothing more unnerving that a pack of savage Suyetka Class Small Skyships swooping towards you. These unforgiving predators pack a considerable punch, but with their pronounced and intimidating dagger-like shape the battle is often won before an attack is even initiated. 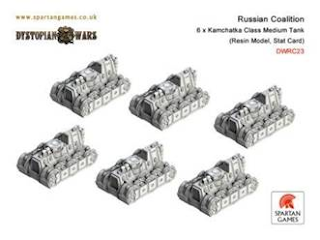 Held behind a wall of Land Ships, the Kamchatka Class Medium Tanks initially serve as a rearguard, using their flexible turrets to ward off any outflanking attempts, whilst protected from incoming fire. Then, when close enough, they spring forward with their powerful engines to wreak havoc with a series of infantry assaults. They then continue to throw out a frightening volume of close-range fire, remaining a threat to even the most resilient of opponents. 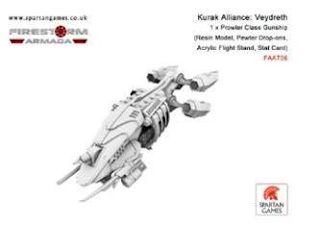 In space combat, the Veydreth favor swift and maneuverable craft. They carry a large array of devastating weapons and, with no shields, prefer to rely on speed and overwhelming firepower to destroy their foes. The Prowler Class Gunship defines the pack-hunter persona of the Veydreth, lurching forward with a menacing scowl: Prowler by name and most certainly by nature!

This ranged hunter is designed to circle its target like a bird of prey, working best from a distance where it can utilise its broadside launch tubes. The Hunter Class Destroyer is also a subtle stealth bomber, able to become an invisible killer when it cuts its engines. Indeed, no one is safe when the Veydreth are unleashed!

The remarkable Arual Class Assault Cruiser is built around versatile weapons deployment systems and massed assault crews. Formations are now commonly seen patrolling the boarders of the Sebrutan as well as being deployed within larger Aquan and Terran armadas.

Combining Terran technology with the design principles of the Sebrutan, the Terquai Empire have come to provide many vessels to defend their new home. One of the most dangerous and imposing ships in their arsenal is the devastating Makalu Class Torpedo Cruiser. This awe-inspiring ship has stopped many incoming attacks from savage raiders over the years, shattering their invading fleets and pursuing them right to their territory border. 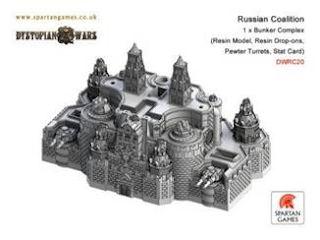 The immobility of the Bunker Complex means it can mount the largest and most destructive ordnance the Russian Coalition can devise. Below each emplacement is a network of heavily defended magazines and stores to keep the fort’s weaponry and its crew battle-ready. The Bunker Complex has helped to establish and maintain the Tsar’s iron rule over the vast regions through which his armies march and his fleets sail. It is one of the last physical embodiments of the Russian monarch’s power and his expansionist dreams.
Posted by ACD Distribution at 10:08 AM