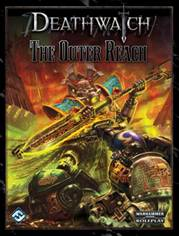 Evil lurks in the darkness between the stars. Will you face it? The Outer Reach, a supplement for Deathwatch, explores the worlds beyond the grasp of the Achilus Crusade, including those held by the ancient Necrons. Meanwhile, this arcane tome gives players and Game Masters never-before-seen access to the enigmatic Dead Cabal, a mysterious circle of warrior-scholars who have devoted their lives to fathoming the unfathomable. Bring the light of the God-Emperor to the dark corners of the Jericho Reach!

Key Selling Points • A supplement for Deathwatch that explores never-before-seen parts of the setting • Includes details on dozens of dead worlds, home to slumbering Necron armies • Give insight on the enigmatic Dead Cabal, a brotherhood of warrior-scholars sworn to uncover secret plots against mankind • Contains numerous world descriptions, stats on new foes, and engaging plot hooks 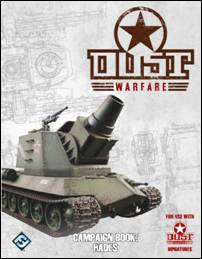 The war for the doomed city of Zverograd heats up in Campaign Book Hades, a supplement for Dust Warfare! The pivotal battle has dragged on for months, and all three factions now seek any means of breaking the stalemate. Campaign Book Hades includes new unit stats, rules for superhuman characters, never-before-seen special abilities, and Tesla weaponry. What’s more, this jam-packed resource features the epic Hades Campaign, a long-term conflict in which players plan their engagements using a detailed overland map of Zverograd.

Key Selling Points • A supplement for Dust Warfare that continues the tense struggle for Zverograd • Includes new unit stats for all three factions, plus rules for superhuman units and new special abilities • Features the epic Hades Campaign, in which players vie for control of a doomed city
Posted by ACD Distribution at 10:00 AM