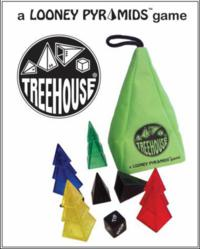 Treehouse is a fast, fun, easy-to-learn game for 2 to 4 players, winner of the Origins Award for Best Board Game of 2006. Your goal is to rearrange your pyramids to match the set in the center of the table, using only the moves you roll on the custom die. Rules to a bonus game, Pharaoh, are also included, along with a colorful 24 page Guide to Looney Pyramids promoting the game system and 11 other games that can be played with the pyramids. Packaged in a pyramid shaped zippered pouch (5.5" x 3.25" x 3.25") with 15 pyramids, 2 custom dice, and instructions for two games. 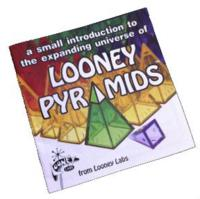 This 32 page book/magazine contains the full rules to all 13 of the games that are promoted in the Pocket Guide to Looney Pyramids which is included in both the IceDice and Treehouse game bags as well as the boxes of expansion pyramids. Two copies of this rules primer are included in the Demo Kit, so you have the rules to teach the games, and stores can buy single copies at their standard discount off the $6 MSRP – but we will also sell stores a 10-pack at a 70% discount off MSRP. At only $1.80 each stores can give one away with any large purchase of pyramids and/or use them as prizes at events!