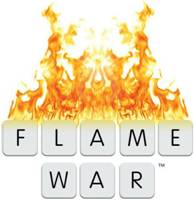 Flame War is a stand-alone card game where each player takes the roll of a forum administrator. Players start threads, post to threads, flame and troll each other, and eventually close down the threads. The player who abuses their internet powers the most by closing down the most active threads wins! Flame War was designed by veteran game designer Andy Chambers. Andy was a key designer at Games Workshop for over a decade, designing games like Warhammer 40K 2nd edition, Warhammer Fantasy Battle, and more. Recently, he was the creative director for StarCraft 2. Flame War is the game he carried in his pocket to play with friends in bars, available to the public now for the first time.
Posted by ACD Distribution at 1:00 PM