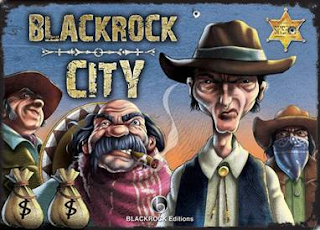 You are the Chief of your group of outlaws and you must win a maximum of gold and silver by attacking banks and stagecoaches. You will have to be clever to estimate the number of outlaws needed to attack; and watch out for the Sheriff and your opponents!

This game is played in rounds. Each round, players bid on the right to perform the next bank robbery, using the members of there robber band (outlaws). The winner of the bid attacks the city, which will often net him some gold and give him new outlaws (by freeing them from prison). However, which city is attacked is determined by the difference between the winning bid and the lowest bid. So, bids from the other players will influence the winner's gains. The player with the second highest bid will attack the stagecoach and gain some silver.

The game ends when no player has an outlaw left or all players refuse to bid on a given round. The player who has collected the most gold and silver wins the game.