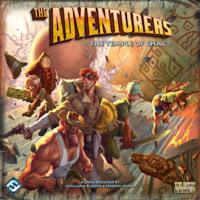 The Adventurers: The Temple of Chac is an exciting push-your-luck board game in which two to six players each take control of one of twelve adventurers eager to explore a remote temple filled with dangerous traps and valuable artifacts. To claim these priceless treasures, the adventurers must dash through a perilous maze, dodging moving walls, molten lava, and a gigantic boulder. The player whose adventurer escapes alive with the most treasure is the winner!