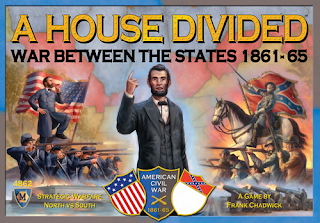 A House Divided™ The War Between the States 1861-1864. A House Divided simulates the epic struggle of the American Civil War that was fought over the twin issues of slavery and state's rights. The period from 1840 to 1861 saw these issues brought to a boil, and in 1861 the nation became tangled in a terrible war that lasted four long years.

The game depicts the war between North and South from the First Battle of Bull Run (or Manassas Junction) to Lee’s surrender at Appomattox Courthouse (or Grant’s surrender at Harrisburg…).Each player leads one of these two nations and makes the strategic decisions which determine the outcome of the war.

The game board represents the United States, north and south and from the Atlantic coast to just west of the Mississippi. Including Missouri, Iowa, Illinois Indiana, Ohio, Pennsylvania, New York, New Jersey, Delaware, Maryland, Virginia, North Carolina, South Carolina, Georgia, Florida, Alabama, Mississippi, Louisiana, Arkansas, Tennessee, Kentucky and West Virginia. The play map contains a number of boxes, each representing a city, town or locations important to the war. These boxes are connected by transportation lines – blue for rivers, tan for roads and black for railroads – which provide the paths to victory or defeat. Will you keep the Union whole or force the separation of the United States?