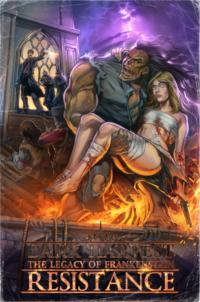 Resistance is the first full supplement for the critically acclaimed RPG Dark Harvest: The Legacy of Frankenstein. Building on what has been described as “…without a doubt the best world description I have ever seen…” (Brian Fitzgerald, Game Knight Reviews*) the supplement focuses on the struggle between Victor Frankenstein’s Promethean authorities and the Creature’s Resistance fighters, as well as covering many other aspects of life within Promethea.

Included are:
• A full items and equipment listing using 1920’s monetary values
• New and clarified rules and mechanics
• New NPCs, organizations, and Augmentations
• Detailed maps of military installations
• A full scenario with campaign suggestions
• Six page intro comic
• Detail on subjects ranging from the Resistance and the Promethean Military Forces, to the Suffragette movement in Promethea and the thriving black market; from escaping the country to how both the authorities and the Resistance try to stop that happening; from passive resistance by university staff to the knife in the dark arranged by a dark cabal misinterpreting Frankenstein’s wishes.
• Three new short stories by Iain Lowson, adding yet more flavor and detail to the Dark Harvest setting. Resistance covers everything from merciless high politics in Victor Frankenstein’s inner circle of advisors, to the desperate fight for life and liberty in the mud and darkness between loyal soldiers from both sides; and looming over all, the relentless Dark Harvest continues…
Posted by ACD Distribution at 9:30 AM