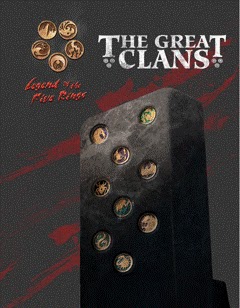 AEG3306
L5R RPG: The Great Clans
$39.99 SRP
The Emerald Empire of Rokugan has long been one of war and conflict, a great history forged at its heart by an unending sibling rivalry.
The Great Clans of Rokugan were founded by the Kami, children of the Sun and Moon, and their adherence to their founders personalities and vows have defined the Empire. Each seeks to gain ground over the others, a continuing reflection of the Tournament of the Kami that set the Empire in motion so long ago. The Great Clans takes you deep into the psyche and workings of the The Great Clans of Rokugan.
The book features a full chapter on each of the Great Clans, focusing on the various families, histories, and culture that makes up those Clans.  Additional chapters also cover the evil Spider Clan, the return of Heritage Tables, and vassal families.
Posted by ACD Distribution at 9:26 AM