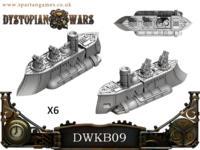 SGCDWKB09
DW: Britannia Bastion Escort (6)
$9.99 SRP
Anti-Aircraft is the role of the Bastion Class Escort. This small and nimble vessel is designed to protect the larger vessels, such as the Ruler Class Battleship, from incoming aerial assaults. 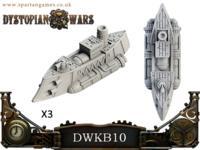 SGCDWKB10
DW: Britannia Orion Destroyer (3)
$11.49 SRP
Britannia Destroyers are, like all ships of this class in Dystopian Wars, Pack Hunters. That is to say they have a special MAR rule that allows them to hunt down larger vessels and destroy them. The Orion has a single fore turret with a 270 degree arc of fire and fore torpedoes. It can be deployed in a squadron of 2 to 4 models. 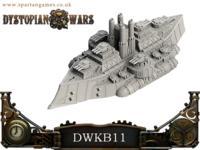 SGCDWKB11
DW: Britannia Majesty Dreadnought
$23.49 SRP
The Majesty Class is a sight to behold when steaming towards the enemy, its SIX Primary turrets coming to bear on enemy targets. Defensively the model can have up to TWO Shield Generators, which can be added without losing any turrets. Although relatively costly at 230 points (270 points with its two shield generators), the Majesty is a fine addition to any Naval Fleet.

SGCDWKB22
DW: Britannia Sovereign Class Land Ship
$21.49 SRP
The Sovereign is the utility workhorse of the Britannian land armies, and is a common sight across the world. As well as performing logistical functions it is very versatile, with different models of the same design having either turrets, mortars or a headquarters.

SGCDWKB23
DW: Britannia MKII Medium Class Tank (6)
$11.49 SRP
The MKII has plenty of firepower in three arcs giving it lots of options and no fear of being surrounded. A well positioned squadron of MKIIs can hold ground and threaten multiple enemies, linking their fire when necessary to take down targets of a larger class.

SGCDWKB24
DW: Britannia Cromwell Class Bombard (6)
$11.49 SRP
The Cromwell is a bunker buster of a tank. Although rigged for indirect fire it has been used extensively on the battlefield as a close range battle tank.

SGCDWKB25
DW: Britannia Terrier Small Tank (20)
$11.49 SRP
The Terrier is fast and agile, usually deployed in large numbers as a screen. In a combined attack a full squadron is a threat to most targets.
Posted by ACD Distribution at 9:20 AM