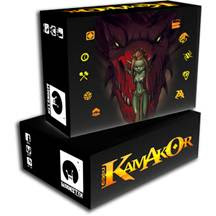 ASMGOS02
Gosu Expansion: Kamakor
$29.99 SRP
Five new clans will join the battle for goblin supremacy! One thing is for sure, Kamakor will tear your retina! The five clans of the expansion include Kobuke Goblins, Warmachine Goblins, the Shadow Goblins, Dragoon Goblins and the Shibuke of the World Tree.
The Shadow Goblins come from the other side of The Portal! Which Portal will you ask? As you know, the Dark Goblins that you discovered in the main game have a trapping power. When they use it, as you may see on some artworks, the trapped goblin is in effect thrown out through The Portal. For decades now, returning goblins have reported having encountered members of a mysterious and frightening goblin clan … The Shadow Clan!
The design of the Shibuke of the World Tree is an assumed nod to the Na'vi from the movie Avatar, and the strange creatures represent a new breed introduced into the extension. The Shibuke have the distinction of not having mutated, although they can still benefit from the deployment of another creature to get in.
With 100 new cards, Kamakor is set to add whole new dimensions to Gosu!
Posted by ACD Distribution at 10:00 AM