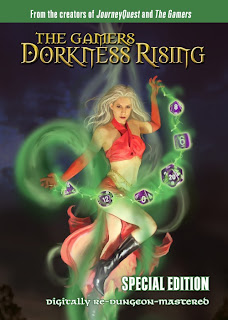 DEDDR001
The Gamers: Dorkness Rising SE DVD
$19.99 SRP
Struggling writer Lodge (Nathan Rice) isn’t asking for much: he wants his gaming group to finish playtesting his table-top adventure, rather than killing, looting, and debauching his fantasy world.
Desperate to save the integrity of his story from the whims of his players' crazy characters—a horny bard, wild sorceress, and cryptic monk—Lodge allows Joanna (Carol Roscoe), Cass's (Brian Lewis) ex-girlfriend, to join the game. With Joanna's help, the group's characters progress deeper into the fantasy game world to retrieve the Mask of Death from the evil necromancer Mort Kemnon (Geoff Gibbs). Will their choices in the game save their friendships in real life . . . or will Mort Kemnon triumph unopposed?
A hilarious adventure through a world of Swords & Sorcery, The Gamers: Dorkness Rising has been digitally remastered for this definitive DVD. Extended Branching Edition, with fourteen extended and deleted scenes.
Posted by ACD Distribution at 4:29 PM