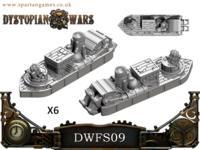 SGCDWFS09
DW: FSA Springfield Class Escort (6)
$9.99 SRP
The Springfield is intended to escort and protect larger vessels from aerial attacks. With a low points cost and an AA rating of 3, the vessel is a well priced addition to a Dreadnought, Carrier or Battleship. 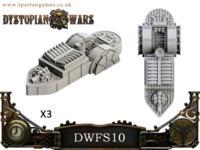 SGCDWFS10
DW: FSA Guilford Class Destroyer (3)
$11.49 SRP
Although its fore guns are not the most powerful, the Guilford does make up for this with port and starboard Rocket Batteries that are effective out to Range Band 3. As with other Destroyers in the game, up to 4 can be used in a squadron and the Pack Hunters MAR makes them fairly lethal. 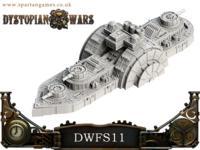 SGCDWFS11
DW: FSA Enterprise Class Dreadnought
$23.49 SRP
The Enterprise Class is, quite literally, a floating platform of death. It can slam an enemy with its THREE Primary turrets, rain down destruction from above with its Rocket Batteries and, with a plethora of anti-aircraft batteries and concussion charge stations, defend itself rather well. The model is well worth its 240 points.

SGCDWFS22
DW: FSA Washington Class Land Ship
$21.49 SRP
The Washington is one of very few aquatic tanks having been developed by the FSA to support amphibious landings. Its dual use and potent firepower make it a dangerous asset on the battlefield, while the high profile of its headquarters makes it a rallying point.

SGCDWFS23
DW: FSA Trenton Class Medium Tank (6)
$11.49 SRP
The Trenton has powerful forward and aft batteries. A squadron of Trentons is adept at close formation manoeuvres, so that multiple squadrons of Trentons can maintain clear arcs of fire to the front while remaining a danger to enemies that pierce their rear lines.

SGCDWFS24
DW: FSA Yorktown Class Bombard (6)
$11.49 SRP
The Yorktown provides essential artillery support to FSA formations. It can lay down destructive strikes from the rear, and has the added feature of firing either forward or backward.

SGCDWFS25
DW: FSA Pioneer Class Small Tank (20)
$11.49 SRP
The Pioneer is a tough little tank. It combines direct firepower with improved anti-aircraft capability, and in a full squadron can threaten most flyers.
Posted by ACD Distribution at 9:00 AM