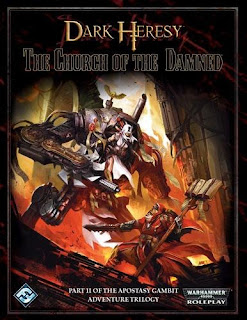 FFGDH14
40KRPG: Dark Heresy: Church of the Damned
$24.95 SRP
Investigating corruption within the Ecclesiarchy itself is as delicate as it is dangerous, but when an influential leader is suspected of heresy, a team of Acolytes will uncover an ever-deepening conspiracy that could spell the end of the entire Calixis Sector! The Church of the Damned is the second adventure in The Apostasy Gambit, a Dark Heresy campaign that takes a cell of Acolytes from investigating the tragic history of a warped Cathedral to crusading against a conspiracy at the heart of one of the Imperium’s most vaunted organizations. While The Church of the Damned continues the events started in The Black Sepulchre, it also includes starting points to be played on its own or as part of a custom campaign. The Maledictor’s Hand, a secret group of fanatical extremists, manipulates the Imperium from the shadows. The Acolytes must hurry to stop this dark plot before it’s too late. But who can they trust?
Posted by ACD Distribution at 9:44 AM