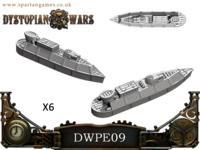 SGCDWPE09
DW: Prussian Empire Wachter Escort (6)
$9.99 SRP
While most escorts are intended to provide anti-aircraft protection or concussion charge protection, the Wachter is actually designed to protect vessels in one simple way: hurt the enemy! 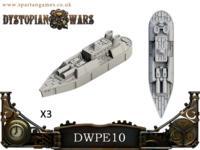 SGCDWPE10
DW: Purssian Empire Stolz Destroyer (3)
$11.49 SRP
Although its fore guns are a fixed channel, they are a Primary weapon and at Range Band 1 kick out 6AD of hurt to an enemy. Like other Destroyers these vessels have the Pack Hunters MAR, making a squadron of 4 models rather nasty. 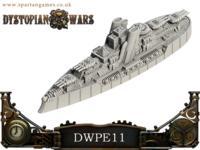 SGCDWPE11
DW: Prussian Empire Blucher Dreadnought
$23.49 SRP
Gebhard Leberecht von Blucher was a famous Prussian Generalfeldmarschall (Field Marshall) who was known for his rather direct military tactics. 'On it like Blucher' is a term synonymous in the Prussian military for taking the fight to the enemy. The designers behind this Dreadnought certainly took this to heart. FOUR powerful Primary turrets rain death on enemy targets and row after row of Tesla Coils rip into enemy vessels.

SGCDWPE22
DW: Prussian Empire A9-V Sturmpanzer
$21.49 SRP
The Sturmpanzer has become rightly feared across the battlefields of the world. It has a fearsome array of turrets and is armed to the teeth with Tesla coils. Sturmpanzers are at the forefront of every assault and form the heart of every defense.

SGCDWPE23
DW:Prussian Empire A6-V Medium Tank(6)
$11.49 SRP
The A6-V has flexible arcs of fire to take advantage of individual and linked fire. It also carries a sizeable complement of rocket marines. A full squadron of A6-Vs can pose an ever present threat of a massed boarding assault.

SGCDWPE25
DW: Prussian Walze Class Small Tank (20)
$11.49 SRP
The Walze is an efficient scout tank, often deployed in large squadrons. With its fore guns and Tesla coils it is able to look after itself in a fire fight.
Posted by ACD Distribution at 9:40 AM