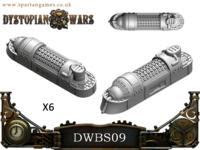 SGCDWBS09
DW: Blazing Sun Kitsune Class Escort (6)
$9.99 SRP
After the demise of the Battleship Hideyoshi to an aerial attack of Chinese Federation bombers, where the vessel had been left unprotected during a naval engagement, the Blazing Sun military vowed to never make this mistake again. The Kitsune is designed to provide a low cost AA defense for the likes of Carriers, Battleships and Dreadnoughts. 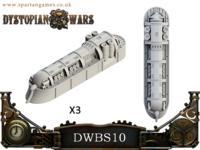 SGCDWBS10
DW: Blazing Sun Yurgi Destroyer (3)
$11.49 SRP
Rockets, rockets and more rockets. You can hear the engineers of this destroyer howling for more ranged weaponry. As with other ships of this class the Pack Hunters MAR is in play, and a full squadron of 4 Yurgis is a sight to behold as all the Rocket Batteries let loose. 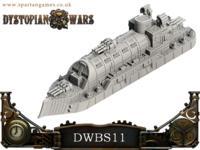 SGCDWBS11
DW: Blazing Sun Hachiman Dreadnought
$23.49 SRP
With three of the world's most powerful naval turrets attached to its hull, the Hachiman can target an enemy in Range Band 1 with 25 dice, hit targets in its fore arc with as many as 7AD of torpedoes and shoot out up to 9AD of Rocket Batteries at Range Band 4. Don't get too close or an AP of 12 will cost you your crew (and ship!) and an AA of 8 helps protect the vessel from aerial attacks. The Hachiman is a powerful all round vessel.

SGCDWBS22
DW: Blazing Sun Taka Ishi Heavy Walker
$21.49 SRP
The Taka Ishi represents an alternate advance in the design of battlefield assets. With its mere size it presents an intimidating target and is a beast in urban combat. It has great all round fire with its knee turrets, main turret and rocket battery.

SGCDWBS23
DW: Blazing Sun Chi Ri Medium Tank (6)
$11.49 SRP
The Chi Ri has a durable chassis and a wide firing arc with its turret and broadsides. It also has a good anti-aircraft ability for its class.

SGCDWBS24
DW: Blazing Sun Ho I Class Bombard (6)
$11.49 SRP
The Ho I is more than capable of bombarding enemy vehicles and fortifications with sustained fire at both short and long range. It can also fire into either the fore or aft arcs.

SGCDWBS25
DW: Blazing Sun Ke Ho Small Tank (20)
$11.49 SRP
The Ke Ho has a straightforward design (even if it is round!) and can take a fair amount of punishment for its size. A squadron of Ke Hos can be quite a threat to ground and air targets alike.
Posted by ACD Distribution at 4:20 PM