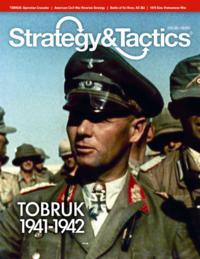 Tobruk uses the same system as Sedan: The Decisive Battle for France, May 1940. Tobruk is a simulation of British Eighth Army’s Operation Crusader, the attempt to relieve the Tobruk garrison during the period from November to early December 1941, with each turn representing two days. The units in the game represent regiments (228 counters), and operate according to a chit-pull divisional-command activation system. Movement and combat are randomized by each division’s potential activation, such that the general course of play goes a long way toward simulating the fog of war in a simple yet realistic manner and without the need for special rules. As a new addition to this system (not present in Sedan), to simulate the more pronounced effect of long-range anti-tank guns in desert terrain, units with AT capability are identified, and they’re given the capability to engage enemy armor as it approach, just as the infamous 88s did at Hellfire Pass. Each hex represents four miles, and the map area portrays the Western Desert from around Tobruk to near the Libyan/Egyptian border. 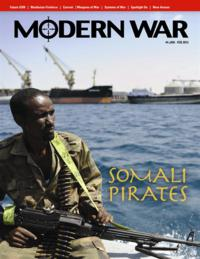 Somali Pirates, designed by Joseph Miranda, is a wargame set in a hypothetical Coalition campaign to destroy the power of pirates based in Somalia, as well as to otherwise gain control of that country. The assumption of the game is that the pirates, in league with local warlords and Al Qaeda, have become strong enough to be an even bigger threat to the region than they are now. In response, various powers launch military action against them. There are two players in Somali Pirates: The Coalition, who wants to destroy the pirates, and the Pirates, who want to survive, as well as to maximize their own power and wealth. Central to play of the game is the Netwar Index. Each player has a Netwar Index that indicates how successful he is in achieving his goals...effectively, representing the amount of public support that each side is getting. The Netwar Index affects various aspects of the game, such as mobilization of reinforcements, and is also part of gaining victory. Both players have a set of counters that represent their naval, land, air and special operations forces (SOF). Players move their pieces across the spaces on the map and engage in various kinds of conflict in order to destroy enemy forces, seize critical geographical regions, and change the Netwar Index (hopefully in their favor). Both sides can mobilize new units by paying for them with Netwar Points. Given the asymmetry of the situation, each side in the game will have several unique rules.. The game includes one map of East Africa and environs, from the Red Sea to the Indian Ocean, and one counter-sheet (228 counters) representing various pirate and Al Qaeda forces, local militias and warlords, plus the principle Coalition forces (primarily NATO and the United States, and even a potential inclusion of a Chinese expeditionary force). The game includes one map (22x34”) and 228 counters.
Posted by ACD Distribution at 1:00 PM