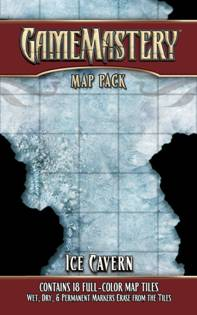 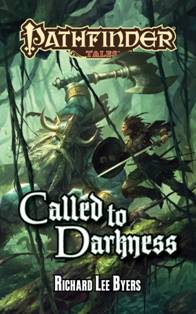 Kagur is a warrior of the Blacklions, fierce and fearless hunters in the savage Realm of the Mammoth Lords. When her clan is slaughtered by a frost giant she considered her adopted brother, honor demands that she, the last surviving Blacklion, track down her old ally and take the tribe''s revenge. Yet this is no normal betrayal, for the murderous giant has followed the whispers of a dark god down into the depths of the earth, into a primeval cavern forgotten by time. There, he will unleash forces capable of wiping all humans from the region—unless Kagur can stop him first. From acclaimed author Richard Lee Byers comes a tale of bloody revenge and subterranean wonder, set in the award-­-- winning world of the Pathfinder Roleplaying Game. 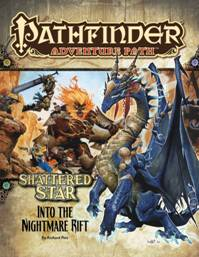 With five shards of the Shattered Star secure, visions point toward one of Varisia''s most remote corners as the site protecting the sixth fragment of the powerful artifact. Yet the heroes are not the first to search for this shard—upon arriving at the ancient ruin known as Guiltspur, they find a small army of giants said to be ruled by a blue dragon already excavating the site. And as the heroes soon learn, there are other forces searching for the final shards from the Darklands below, and even from beyond reality itself, for Guiltspur lies dangerously close to the nightmare realm of Leng! Into the Nightmare Rift is a Pathfinder Roleplaying Game adventure for 13th-­--level characters. This volume continues the Shattered Star Adventure Path, including articles on Lissala, the ancient goddess of runes and fate, a gazetteer of the weird demiplane of Leng, and several new monsters (including Lovecraftian terrors like the nightgaunt) in the Pathfinder Bestiary. Author Bill Ward (Return of the Sword) continues a new novella in the Pathfinder’s Journal. Each full-­--color softcover Pathfinder Adventure Path volume contains an in-­--depth adventure scenario, stats for several new monsters, and support articles meant to give Game Masters additional material to expand their campaign. Pathfinder Adventure Path volumes use the Open Game License and work with both the Pathfinder RPG and the world’s oldest fantasy RPG. 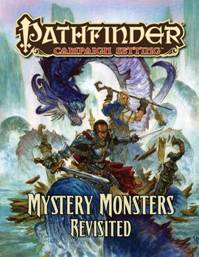 Know the unknown as you explore the lore and inner workings of the Inner Sea’s most elusive creatures in Pathfinder Campaign Setting: Mystery Monsters Revisited! Unravel the myths behind legendary creatures inspired by real-world monsters, like the blood-sucking chupacabra, the larger-than-life sasquatch, and the mountain-dwelling yeti—and discover how they fit into the award-winning Pathfinder campaign setting alongside such infamous favorites as the equine Sandpoint Devil and disaster-heralding mothman. Each mystery monster includes examples of its misdeeds, evidence the fiend leaves in its wake, and a sample stat block of an especially nefarious version of the beast. In a world where little is as it seems and the monsters are always one step ahead of their pursuers, get the upper hand with Pathfinder Campaign Setting: Mystery Monsters Revisited! By Richard Pett, Anthony Pryor, Amber E. Scott, Ray Vallese 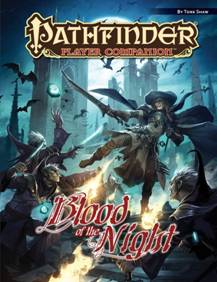 Become a child of darkness with Pathfinder Player Companion: Blood of the Night! All of Golarion's most infamous vampiric races take center stage in this guide to tracking, hunting, and playing the aristocracy of the undead. Join your next campaign as a day-walking dhampir from a variety of vampiric heritages, or infect your game with the vampiric curse as a full-blooded jiang-shi, moroi, nosferatu, or vetala vampire—complete with details on how to integrate such deadly and deathly characters into existing campaigns. Add a true thirst for blood to your characters with new rules for vampiric hunger, along with new powers associated with the most ravenous undead. Or, for true children of the light, expand your arsenal with the latest and most effective in undead-fighting gear, tactics, and character options. A silent war rages in Golarion's shadows, with Pathfinder Player Companion: Blood of the Night, it's time for you to choose sides! Written by Tork Shaw. Each 32-page Pathfinder Player Companion contains several player-focused articles exploring the volume’s theme as well as short articles with innovative new rules for all types of characters, as well as traits to better anchor the player to the campaign. 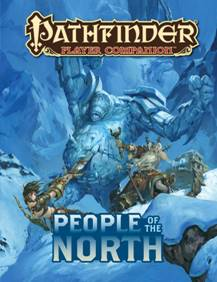 Rugged lands and merciless cold breeds hard, cunning people who do what they must to survive. Such are the ways of the northlands of the Inner Sea region, and the fierce people of the deadly nations of Irrisen, the Lands of the Linnorm Kings, and the Realm of the Mammoth Lords. Learn the secrets of these brutal frontiers, whether as a master of icy magic, a hunter who tracks through the fiercest polar blizzards, or as one of the region’s cunning natives, like the Ulfen vikings, savage Kellids, Erutaki hunters, or mysterious Snowcaster elves. The lands, people, magic, and secrets of this brutal frontier are yours to discover with Pathfinder Player Companion: People of the North. Written by Paizo Staff. Each 32-page Pathfinder Player Companion contains several player-focused articles exploring the volume’s theme as well as short articles with innovative new rules for all types of characters, as well as traits to better anchor the player to the campaign.
Posted by ACD Distribution at 9:13 AM