Don’t forget the base game! 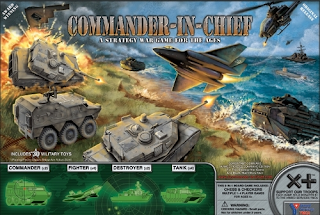 Commander-In-Chief is a fun fast-playing abstract strategy war game in which a player's Air, Land and Sea military vehicles work as a unified Armed Forces assault team to "capture" their opponent's Commander. The board consists of a traditional 8 square x 8 square checkerboard grid divided into two Land areas separated by a Sea area. Vehicles are restricted to movement within their assigned battlefields: Through the Air, On Land and/or In the Sea.
Pieces transverse the board in a Chess-like manner. Play evolves, turn by turn, with each player analyzing the current battlefield situation, adjusting their game plan accordingly and executing commands (movements of the playing pieces) in a collective effort to achieve the game's objective. Certain Air pieces (Bombers and Helicopters) can Go Over pieces; likewise certain Sea pieces (Submarines) can Go Under pieces. Additionally, certain pieces (Bombers and Tanks) can Block. The complete Original Release Basic Training Game Rules include "Object of the Game" options, "Team Game Play" options and "Advanced Game Play" options. "Future" options will include new movements, expansion pieces, additional damage control options, new attack features, mini wars and expanded terrains as variants to the Original Release Game Rules. 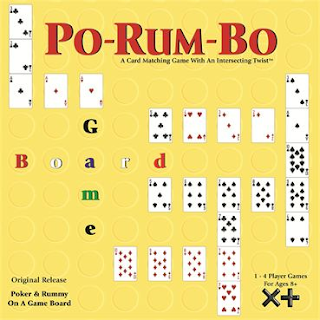 Po-Rum-Bo is a turn-by-turn card matching game with an intersecting twist for up to four players. Designed for ages 8 and up, Po-Rum-Bo is a Poker meets Rummy board game. Create 3 of a kind, 4 of a kind, straights & flushes and criss-cross them on a game board to outscore your opponent(s).
Posted by ACD Distribution at 9:00 AM

Email ThisBlogThis!Share to TwitterShare to FacebookShare to Pinterest
Labels: Commander In Chief, december, january, x plus