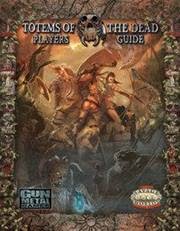 CB76721
SW: Totems of the Dead Players Guide
$ 29.99 SRP
SDI
Before you lies a savage new world of sword and sorcery like no other! A terrible new age has dawned upon the Untamed Lands. The shining age of the ancestors is crumbling beneath a rising tide of blood and slaughter. Here lie the civilizations of the Untamed Lands, warring with their neighbors just to survive as their crops and game dwindle. The Skadians with their dragon-prowed ships, the Shenese with their wealth of silk and steel, the Maztlani with their obsidian edged blades and the Tribal Confederacies with the unbreakable strength of many arrows. Ruskar invaders stain the snow crimson while Atlantean war parties ravage the eastern shores. Meanwhile the serpent folk lie coiled to strike the warring human nations.
NO
IMAGE
AVAILABLE
CB6722
SW: Totems of the Dead GM’s Guide
$ 29.99 SRP
SDI
Arriving in January! 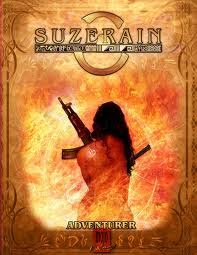 CB75650
SW: Suzerain: Suzerain Adventurer (SC)
$ 24.99 SRP
SDI
Suzerain (n): An ancient word meaning “master” or “overlord.” Play a Viking berserker, a cyberpunk, or Zeus himself... these groundbreaking rules let you do it all with ease. Discover a fantasy world where people can change race, post-apocalyptic Wilderlands with strange and powerful mutations, a cyberpunk city hidden in a bubble from The Goddess herself, or a swashbuckling fusion of magic and musketry. The Suzerain Adventurer brings you a completely new rules system. All you need is this book to get started as it contains all the core rules and setting material to start exploring the worlds of Suzerain with. 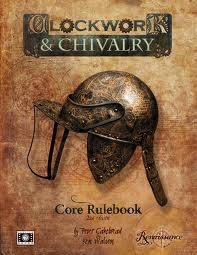 CB76106
RQ2: Clockwork & Chivalry 2nd Edition (HC)
$ 49.99 SRP
SDI
Swords and flintlocks, alchemy and clockwork, fanatics and freedom-fighters... and the occasional ghoul! 1645: England has descended into civil war. Prince Rupert and his alchemist-cavaliers fight on behalf of their exiled king against the clockwork war machines of Oliver Cromwell and the New Model Army. Between them, a host of political and religious factions struggle for survival. Clockwork & Chivalry returns in a standalone 2nd edition featuring the new Renaissance rules, a fast, grim, heroic D100 system geared up to the world of black-powder weapons, political machinations and fanatical righteousness. 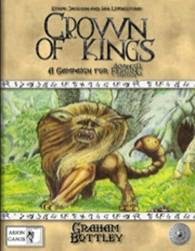 CB77004
AFF RPG: Crown of Kings
$ 24.99 SRP
SDI
The fabled Crown of Kings has been stolen by the Archmage of Mampang, and YOU have been chosen to brave the dangers of Kakhabad and bring it back. This complete campaign for the revised Advanced Fighting Fantasy RPG will take the Heroes across the Shamutanti hills, through the dangerous cityport of Khare and the vast empty Baklands before reaching High Xamen, home to the evil Archmage. Perfect for new players or veterans alike, and for new or experienced Heroes, this campaign brings the classic Sorcery gamebooks to a new audience. 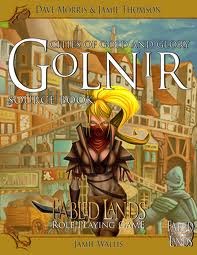 CB77322
FL: Golnir Cities of Gold and Glory
$ 19.99 SRP
SDI
Golnir - The Cites of Gold and Glory is the second source book for the Fabled Lands Role Playing Game. Sail the high seas to the ports of Ringhorn and Metriciens. Plunder ancient treasures and do battle with the legions of darkness in the hall of the death-god Nagil. Penetrate the labyrinth of lies and sinister secrets of the scheming trade merchants. Barter in mysteries, spells and ancient lore with the immortal wizard Estragon. Honor and wealth await those brave enough to adventure in Golnir. No stone is left unturned in the journey through Golnir: travel north to the Tower of Despair and the Haunted Hills; west to Castle Ravayne; south to the glorious cities of Ringhorn and Metriciens or east to the Monastery of Molhern. There is plenty of information, new monsters and adventure plots for a Gamesmaster to fill their adventures in the expanding Fabled Lands Role Plating Game. 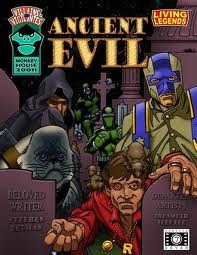 CB77504
V&V: Ancient Evil (SC)
$ 19.99 SRP
SDI
NOTHING THIS EVIL EVER DIES! Kingstown is a sleepy little town where folks just want to live undisturbed. But something unimaginable dwells nearby - something that wants to eradicate free thought, and subject humanity to enslavement and genocide. It is a pure malevolence older than Mankind's darkest primal nightmares. It is Ancient Evil! Ancient Evil is a superhero role-playing adventure by V&V alumnus Stephen Dedman, for a team of 4 to 6 intermediate Villains and Vigilantes ™ or Living Legends ™ characters. Illustrations by Tod Smith, maps and color by Jeff Dee. Ancient Evil includes encounter tables, a timeline of events, stats for over a dozen new villains, and optional rules for underwater and zero-g combat in V&V ™!
NO
IMAGE
AVAILABLE
CB7211
V2E: Marvels of Science and Steampunk
$ 24.99 SRP
SDI
Science: The great marvel of the Age! Whereas magic is the domain of the aristocracy, maintaining their lives of luxury and social prominence, it is an expensive and unpredictable affair, and available only to a select few. The wonders of Steam and the new Science, however, extend their promise to everyone. From ironclad steamships to personal ornithopters from electric telegraphs to Babbage engines the marvels of this age will surely transform the world! And with a little magic thrown in, who knows what else they will accomplish? Marvels of Science and Steampunk explores the great wonders of the Victoriana world, building on the many inventions and technologies covered in the Victoriana Second Edition Core Rulebook and introducing a few more. Marvels of Science and Technology contains: Rules for designing and building technological marvels New character options for engineers Expanded rules for vehicles and vehicular combat New spells and medium abilities that affect technology Dozens of ready-made technological marvels to insert into your Victoriana campaign.
Posted by ACD Distribution at 1:00 PM