GRY101318N
Caveman Curling
$ 49.99 SRP
In Caveman Curling each team attempts to "throw" or flick their rocks, one at a time, down the frozen lake. Special objects such as hammers, which allow the rocks to be moved after the throw, and totems, which protect a thrown rock from being moved, add an extra layer of strategy to the game. Play consists of rounds at the end of which each team or player scores a point for each of their rocks closer to the center of the cave than any of their opponent's rocks. The first team or player to six points wins! 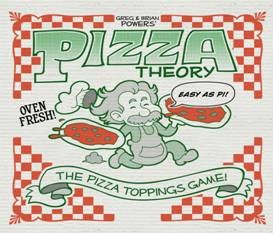 GRY101320N
Pizza Theory
$ 29.99 SRP
In Pizza Theory you and your friends engage in a toppings fracas to determine whose toppings will reign supreme! Create a pizza with your color toppings. Then cut it into slices dominated by your ingredients. Of course your opponents are trying to do the same thing. Choosing the right places to slice will get you victory and all the pizza you can eat, while making the wrong choices will cost you the win and leave you hungering for more.
Posted by ACD Distribution at 9:00 AM