FFGCT52
CoC LCG: Shadow o/t Monolith Asylum Pack
$14.95 SRP
UPC 9781616611422
The sixth and final Asylum Pack in the Ancient Relics cycle for Call of Cthulhu: The Card Game, Shadow of the Monolith continues the cycle’s development of the exciting new Relic trait and concludes the cycle’s exploration of the Ancient Ones’ global reach.
60 new cards (3 copies each of 20 different cards) take the game’s different factions to the South Pacific, where they are greeted by malevolent cultists and their dark spells. Who will prosper when the region’s Relics are unearthed? Who will fall mad or die along the way?
Shadow of the Monolith removes the final veils of the Ancient Relics cycle of Asylum Packs, but its secrets aren’t for the faint of heart! 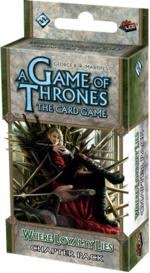 FFGGOT81
GoT LCG: Where Loyalty Lies Chapter Pack
$14.95 SRP
UPC 9781616611767
The A Tale of Champions cycle of Chapter Packs for A Game of Thrones: The Card Game places a strong emphasis on the unique knights, lords, and ladies who would be at the forefront of the tourney environment.
Where Loyalty Lies continues this focus with the introduction of 12 bold, new unique characters, including all-new characters and new versions of existing characters. Players will find more support for the cycle’s exciting new Joust and Melee keywords, which are certain to lead to all manner of new deck types.
With 60 new cards (3 copies each of 20 different cards), Where Loyalty Lies offers players exciting new bannermen for each of the Great Houses of Westeros, though fans of House Lannister and their machinations should be particularly pleased with this new Chapter Pack. 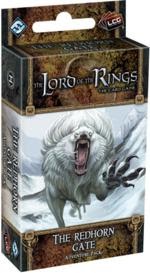 FFGMEC09
LotR LCG: The Redhorn Gate Adv. Pack
$14.95 SRP
UPC 9781616612566
Beginning the second cycle of Adventure Packs for The Lord of the Rings: The Card Game, The Redhorn Gate allows players to experience the thrills of a mountain voyage full of surprises.
When some of Middle-earth’s greatest heroes volunteer to escort Arwen to Rivendell, their pass through The Redhorn Gate begins an epic journey that will take them through bone-chilling snowstorms and hordes of enemies, into the twists and turns of the entire Dwarrowdelf cycle of Adventure Packs.
With 60 new cards, including a new scenario and 3 copies of each new player card, The Redhorn Gate builds upon the encounter sets from the Khazad-dûm Expansion to offer players exciting new challenges during an all-new narrative set in the Misty Mountains!

FFGWHC28
WH LCG: Invasion: The Imperial Throne
$14.95 SRP
UPC 9781616611491
The sixth and final Battle Pack in The Capital Cycle for Warhammer: Invasion The Card Game, The Imperial Throne puts the focus on the Old World’s greatest nation with roughly half of the 60 new cards (3 copies each of 20 different cards) dedicated to the Empire of Man.
The Empire of Man is the greatest nation of the Old World, spanning the continent from the southern Border Princes to snow-clad Kislev in the north, and The Imperial Throne reflects the nation’s richness and diversity. Imperial players gain a new Hero, Fortification, and Capital Center, as well as other units and support cards.
The Empire’s allies and foes also receive new units and support cards, including explosive new support cards and a means of making targeted searches through their decks.
Posted by ACD Distribution at 9:00 AM