Note to Retailers: To purchase these Exclusives you must be registered as a Game Salute Select Store.  Ask your Sales Representative for more details.
To sign-up go to www.GameSalute.com 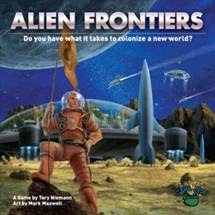 Do you have what it takes to be a deep space colonist? An alien frontier awaits the brave and daring! This new planet will be harsh, but if you have the skills to manage your resources, build a fleet, research alien life, and settle colonies, the world can be yours. Roll and place your dice to gain advantages over your opponent and block them out of useful areas of the board. Use Alien Tech cards to manipulate your dice rolls and territory bonuses to break the rules. Steal resources, overtake territories, and do whatever it takes to get your colonies on the map first! Don't dream it'll be easy, though, because the other players will be trying to do the same thing.

NPI
The designers of Eleminis, the first release from U.S. publisher Smileypop, want us to believe that all the components of the world consist of five elements: earth, air, fire, water and plant. Your goal in Eleminis is to collect one of each of these five elements in your row on the table.
Players each have five slots available to them, and each slot can hold one card. On a turn, you draw a card from the deck then either play it in a row (if it's a element card) or use it (if it's an action). Each element outranks two other elements.
You can play an element card you draw in any empty space or replace a weaker element with the new one; you can play in your row or an opponent's. A star element is wild and can represent any element you need; a trash card can replace any element and can be displaced only by a star or an action card. The actions let you discard cards in play, move cards, swap them, lose your turn, or reverse the order of play. Play continues until someone collects one element of each type in his row. A scoring system is included for those who want to play multiple games. 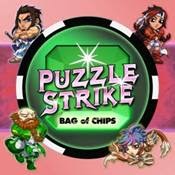 NPI
Puzzle Strike is a card game played with cardboard chips instead of cards that simulates a puzzle video game called puzzle fighter that, in-turn, simulates the fighting game street fighter that is emulated in puzzle fighter You build your deck *as* you play the game.
Every game is different because the bank starts with a different set of chips each game. Also, there are 10 characters to choose from, each with different gameplay. Between all that, there are over 411 MILLION starting conditions in a 4-player game.
Shuffling cards takes too long and is boring, so in Puzzle Strike you just put your cardboard tokens in a bag and shake them up to shuffle! Puzzle Strike contains: Almost 350 cardboard chips 4 cloth bags 8-page full color rulebook Colorful box with inside designed to separate the chips by type for storage.

Puzzle Strike: Upgrade Pack
GSSIRPS02
$ 25.00 SRP
NPI
This upgrade pack includes:
A rebalanced set of the 10 characters in the base set (30 character chips) 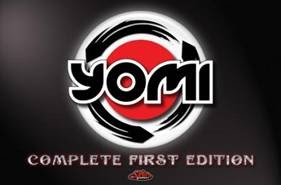 
Yomi is a card game that simulates a fighting game. It tests your ability to predict how your opponents will act and your ability to judge the relative value of cards from one situation to the next. Also, it lets you do fun combos and be a panda.
There are 10 characters to choose from, each with their own deck, abilities, and style. Each deck also doubles as a regular deck of playing cards with beautiful artwork (the complete game features a whopping 120 different character illustrations).
Yomi is the Japanese word for “reading,” as in reading the mind of your opponent. Yomi: Fighting Card Game is a simple competitive card game that simulates a fight between two characters. Each deck in Yomi represents one character, with 10 decks in the first release. 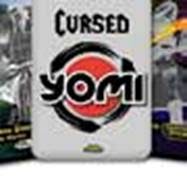 
The cursed cards are a set of new, alternate character cards for Yomi. Yomi is a card game that simulates a fighting game. It tests your ability to predict how your opponents will act and your ability to judge the relative value of cards from one situation to the next.
Posted by ACD Distribution at 1:00 PM