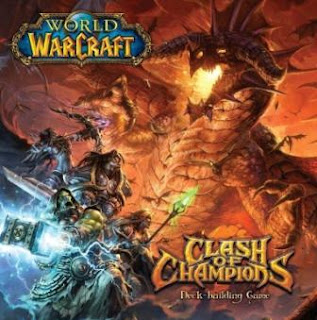 CTZ01297
WoW: Clash of Champions
$ 45.00 SRP
NPI
A new deck building game, centered around one of the most popular online worlds – World of Warcraft: Clash of Champions. Players take on the role of their favorite World of Warcraft Heroes: Thrall, Jaina, King Varian, Garrosh, Sylvanas, and King Magn. Each Hero has special abilities that only they can use in combat. As Heroes level, these special abilities shuffle into their decks. Face off against up to 126 Monster Cards and 9 Epic Bosses. For each victory against an Epic Boss, Heroes level up! Defeat monsters, gather loot, bring down bosses, and stand victorious. World of Warcraft: Clash of Champions allows for incredible replayability with 425 Game Cards. No two games will play the same!
Contents Summary:
Posted by ACD Distribution at 9:00 AM