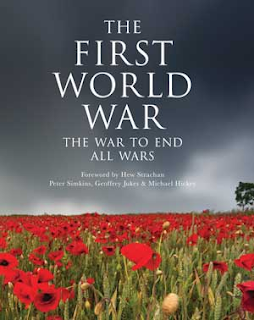 Raging for over four years across the tortured landscapes of Europe, Africa and the Middle East, the First World War changed the face of warfare forever. Characterized by slow, costly advances and fierce attrition, the great battles of the Somme, Verdun and Ypres incurred human loss on a scale never previously imagined. This book, with a foreword by Professor Hew Strachan, covers the fighting on all fronts, from Flanders to Tannenberg and from Italy to Palestine. A series of moving extracts from personal letters, diaries and journals bring to life the experiences of soldiers and civilians caught up in the war. 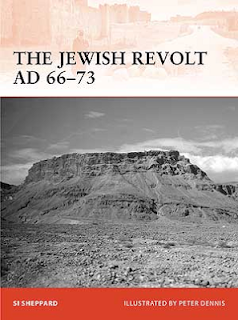 In AD 66, a local disturbance in Caesarea caused by Greeks sacrificing birds in front of a local synagogue exploded into a pan-Jewish revolt against their Roman overlords. Gaining momentum, the rebels successfully occupied Jerusalem and drove off an attack by the Roman legate of Syria, Cestus Gallius, who was defeated at the battle of Beth Horon. The emperor Nero dispatched the Roman general Vespasian along with reinforcements and, having crushed the revolt in Galilee he became embroiled in the events of the Year of the Four Emperors that would lead to his assumption of the Imperial throne. His son Titus was left to carry on the war which culminated in the dramatic siege of Jerusalem in AD 70. Remorselessly, the legions strangled the life out of the defense street by street, leaving nothing but rubble and ashes in their wake. The apotheosis of the conflict was the final stand of the last holdouts in the Temple precinct itself, and the utter annihilation of this, the physical manifestation of Judaism itself. The last remnants held out in the mountain fortress of Masada until AD 73 when with the Romans breaking down the walls the defenders committed mass suicide bringing the revolt to an end. 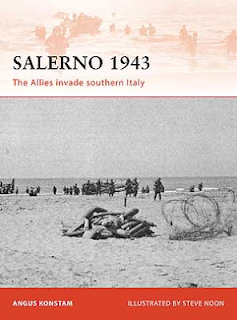 In mid-September 1943, as the opening move of the Allied campaign to liberate the mainland of Italy, an Anglo-American invasion force landed on the beaches of the Gulf of Salerno, only a few dozen miles to the south of Naples. Italy had just surrendered, and the soldiers in the landing craft prayed that the invasion would be unopposed. It was not to be. The Germans had seized control of the Italian-built beach defenses, and were ready and waiting. The ferocious ten day battle at Salerno was eventually decided by a combination of Allied reinforcements, and secondary landings in support of the beleaguered Salerno bridgehead. Using documentary records, memoirs and eyewitness accounts from all sides, Angus Konstam recreates the battle day by day, hour by hour. His methodically researched account offers a fresh perspective on a decisive battle that has largely been neglected by British and American historians in recent years. 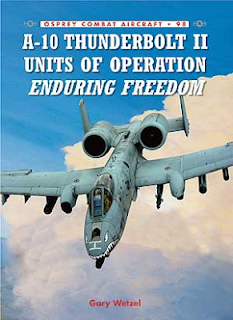 The A-10 was never a favorite amongst the USAF’s senior staff, and prior to Iraq’s invasion of Kuwait in 1990 they had attempted to transfer the aircraft to the US Army and Marine Corps. Reprieved from premature retirement, the A-10 would see combat in the Balkans during the mid-1990s and over Iraq in Operations Northern Watch and Southern Watch until Operation Iraqi Freedom began in 2003. Following the September 11th 2001 attacks in the United States, the Bush administration responded with the instigation of Operation Enduring Freedom. A-10 aircraft first entered the fray during Operation Anaconda in March 2002. During Anaconda four A-10s flying from Pakistan provided 21 straight hours of FAC (A)/CAS coverage. The untold story of the A-10 in Enduring Freedom will be explored and presented as never before through first hand interviews and photography from those involved, along with official military achieves. This title is the first of three planned covering the combat experience of the USAF’s A-10 Thunderbolt II units. Follow-on volumes will examine the role of the Warthog during Operation Desert Storm and Operation Iraqi Freedom. 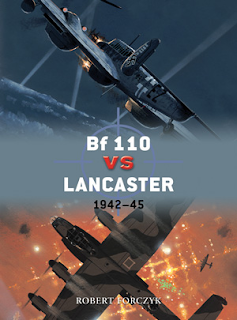 The RAF introduced the Avro Lancaster in 1942 and used it to spearhead this aerial offensive. In response, the Luftwaffe created an elite night fighter force based primarily upon the Bf 110. The Luftwaffe was quick to equip it with airborne radar that allowed it to intercept and destroy Lancasters over Germany. In turn, the RAF adopted countermeasures such as the Monica rearward-looking radar to alert Lancaster crews to the approach of night fighters. In May 1943, the Luftwaffe suddenly developed a novel technical and tactical approach to attacking RAF bombers. The new tactic proved amazingly successful, and British bombers could be attacked from below with no warning. For its part, the RAF failed to detect the new German tactic for six crucial months, during which time its Lancaster bombers were almost defenseless against this new threat. In time, however, the German advantage of surprise was lost and the RAF developed countermeasures to deal with the new threat. The duel between upgraded Bf 110s and Lancasters in the night skies over Germany became increasingly dominated by cutting-edge technology, which would determine the efficacy of strategic bombing. 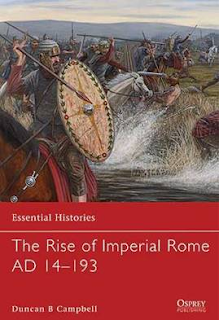 In this book, Duncan Campbell explores the course of the wars that ensued as successive emperors sought to extend the empire, from Claudius’ conquest of Britannia, Domitian’s campaigns on the Rhine and the Danube, through Trajan’s Dacian Wars and Parthian War, to Marcus Aurelius’ Marcomannic Wars, as well as the Jewish Wars. The period covered in this book ends with the consolidation of the Roman frontiers along the Rhine and Danube. This book provides a summary of the strengths, limitations and evolving character of the Roman army during the first two centuries AD, as well as those of the forces of Rome’s enemies across the Rhine and Danube in Germany and Romania, and in the East, in the form of the Parthian empire of Iraq/Iran. Fully illustrated with photographs depicting the emperors, their armies and enemies, and the remains of Roman fortifications and public buildings, plus informative full-color maps, this is the epic story of the wars waged by a succession of emperors during the period in which Imperial Rome reached its zenith. 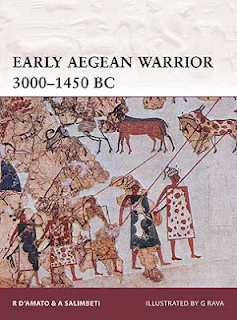 The mainland and islands of Greece were extensively settled by peoples moving from Asia Minor in c.5000 BC, while a further wave in c.5000 BC introduced bronze-working to the region. It is from this point on that it is possible to discern a distinct Cycladic or Aegean civilization, developing at roughly the same time as the Egyptian and Persian civilizations. Further to the south, the Minoan civilization based on Crete held sway, and this power, along with the Helladic Achaeans to the north, gradually swamped the Cycladic civilization in between. In common with most Bronze Age societies, the culture of the Aegean world was dominated by warfare, with the inhabitants living in organized settlements and small citadels with fortification walls and bulwarks, towers and gates to provide protection against invaders from the sea or internecine conflicts. Using the latest archaeological evidence, this title recreates the world of these peoples through a detailed examination of their material culture. 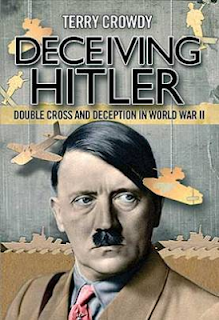 In the war against Hitler, the Allies had to use every ounce of cunning and trickery that they possessed, and combining military deceptions with the double-agent network run by the intelligence services, they were able to send the enemy inaccurate and misleading information about Allied troops, plans and operations. From moving imaginary armies around the desert to putting a corpse with fake papers floating in the Mediterranean, and from faking successful bombing campaigns to the convoluted deceptions which kept part of the German forces away from Normandy prior to D-Day, Terry Crowdy explores the deception war that combined the double-agent network with ingenious plans to confuse and hoodwink the Führer. 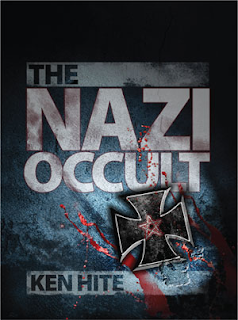 In the dark dungeons beneath Nazi Germany, teams of occult experts delved into ancient and forbidden lore, searching for lost secrets of power. This book tells the complete history of the Nazi occult programs, from their quests for the Ark of the Covenant, the Spear of Destiny, and the Holy Grail, through their experiments with lycanthrope and zero-point energy. It also includes information on the shadow war fought in the dying days of the Reich as the Nazis deployed strange flying saucers that battled to save their final stronghold in the Antarctic. For years, the Allied governments worked to keep this information from reaching the public, and sought to discredit those few who dared to seek the truth. Now, using a combination of photography and artwork reconstructions, the true story of the most secret battles of World War II can finally be told. 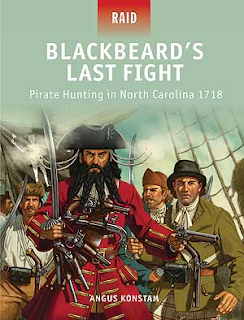 In April 1713, the War of the Spanish Succession came to an end. During the conflict hundreds of privateers, licensed pirates, preyed on enemy shipping throughout the Caribbean. These privateers now found themselves out of a job, and many turned to piracy. One of theme was Edward Teach, more popularly known as “Blackbeard.” He joined the pirates in New Providence (now Nassau) in the Bahamas, and by early 1717, he had become a pirate captain. From then on, he caused havoc off the North American seaboard, in the West Indies and off Honduras, before appearing off Charleston, South Carolina in May 1718. He blockaded this major port for a week, an act that made Blackbeard the most notorious pirate of his day. 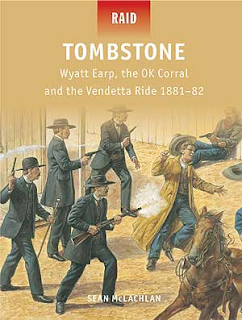 The Gunfight at the OK Corral on October 26th 1881 is one of the most enduring stories of the Old West. It led to a series of violent incidents that culminated in the Vendetta Ride, in which Wyatt Earp, Doc Holliday, and several other gunslingers went after their rivals, the cowboys. Like most tales of the Wild West, the facts are buried under layers of myth, and the line between the good guys and bad guys is blurry. Wyatt Earp, leader of the so-called “good guys,” was charged with stealing horses in the Indian Territory in 1870 and jumped bail. Becoming a buffalo hunter and gambler, he got into several scrapes and earned a reputation as a gunfighter. Several times he helped lawmen arrest outlaws, but usually his assistance came more because of a personal grudge against the criminal than any real respect for law and order. He even got fired from a police job in Wichita for beating up a political rival.