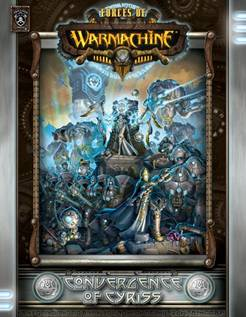 To those who worship Cyriss, no tenet is more sacred than the Fifth Harmonic: the belief that the Clockwork Goddess will manifest once the perfect machine is created across all of Caen. The key to this vessel’s completion lies in the geomantic fulcrums of power that cover the world, many in hostile territory. For centuries the cult has been amassing an immense mechanikal army, poised to take the final steps in readying for their goddess. The time has come for the Convergence to complete the Great Work, and they will let none stand in their way.
100 pages, full color 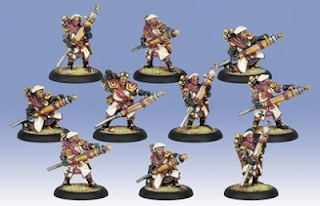 Brave citizen-soldiers of the Protectorate, deliverers fire their deadly Skyhammer rockets in coordinated volleys. The shrapnel-filled explosions that ensue indiscriminately shred troop formations, punishing non-believers with the hand of judgment. A player may field one Deliverer Unit for each warcaster in a Protectorate army.

Grind all who oppose you to dust! Emerging from their hidden temple workshops, the enigmatic Convergence of Cyriss have unleashed their sophisticated clockwork and mechanika weapons called vectors on the Iron Kingdoms as they begin the final phase of their Great Work. The indomitable Forge Master Syntherion sends his heavy Cipher to bombard opposing forces before closing to annihilate them with its powerful piston spikes, while his nimble Mitigator entangles other foes with its razor bola to knock them to the ground, making them easy prey for the Galvanizer’s surgical saw blade.

Clockwork angels are fast and deadly strike forces that utilize the innovation of true flight to remain in constant motion, eagerly disrupting all who would dare to oppose the will of Cyriss. Relying on their speed, maneuverability, and the devastating precision of their polynomial beams to surgically cripple enemy forces, the clockwork angels leave their foes weakened and vulnerable to the finishing blows of other Convergence elements.
A player may field up to three Clockwork Angels units for each warcaster in a Convergence army.
The Clockwork Angels unit comes in a blister.

Led by the legendary Trollkin fell caller Greygore Boomhowler, this mercenary company can match lead and steel with any regiment of soldiers in the Iron Kingdoms. The brutal combination of Greygore’s devastatingly ear-splitting cries and the natural resilience and tenacity of his Trollkin mercenaries has frequently proven invaluable to military commanders across the land.

A player may field one Boomhowler & Company unit in a Mercenary or faction army.

Accompanied by her personal guard of Clockwork Angels, Aurora flies into battle at the vanguard of the Convergence army, striking its enemies with swift precision alongside her mechanikal allies. Aurora is blazing a new way forward for the Convergence, proving herself a peerless warrior and visionary inventor. A beacon of inspiration to all within the Convergence of Cyriss, Aurora sweeps aside any who would impede the Great Work, continually seeking to prove she is ready to transcend the flesh and be set into an immortal clockwork vessel. 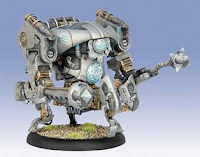 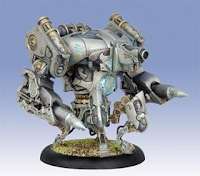 The Inverter represents the first of the Convergence of Cyriss’ vector chassis. Designed specifically for brute force, its heavy spring-loaded macropummeler sends its unfortunate opponents crashing to the ground, making them easy targets for the finishing blows of its meteor hammer.

The Monitor, with a wicked ellipsaw flinger that sends powerful blades spinning toward enemies, represents a deadly ranged threat to any who oppose the Maiden of Gears.

The Cipher supports the assault with a pair of hydraulically powered piston spikes and an integrated servipod mortar that can unleash several different ammunition types in support of its army’s advance.