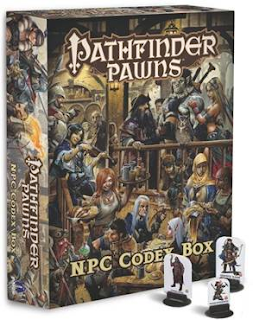 The heroes and villains of the Pathfinder Roleplaying Game NPC Codex charge forth in this complete collection of more than 250 pawns for use with the Pathfinder RPG or any tabletop fantasy roleplaying game! Printed on sturdy cardstock, each pawn contains a beautiful full-color image of a character from the core Pathfinder RPG NPC reference. Each cardstock pawn slots into included 1"-round plastic bases, making them easy to mix with traditional metal or plastic miniatures. With a pawn for every character in the book and more than 250 distinct character images, the NPC Codex Box is the best way to ensure you’ve got the right NPCs to push your Pathfinder campaign to the next level! 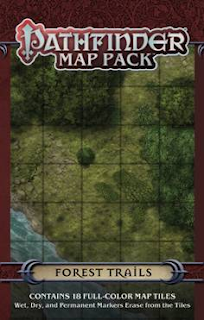 Pathfinder Map Pack: Forest Trails contains 18 full-color 5 x 8-inch map tiles, stunningly crafted by cartographer Jason A. Engle, that combine to form a modular, customizable series of twisting woodland pathways, perfect for adventures exploring the wilderness or hunting the deadliest wild beasts! From deadfalls for unexpected ambushes to twisting trails to baffle even the most experienced tracker, this accessory brings all the mystery and menace of the wilds to your tabletop. Suitable for experienced GMs and novices alike, this product fits perfectly into any Game Master’s arsenal. Wet, dry, and permanent markers erase from the tiles! With revised packaging that includes a reusable box for easy storage, Map Packs have never been so useful! 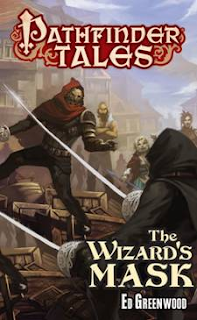 In the war-torn lands of Molthune and Nirmathas, where rebels fight an endless war of secession against an oppressive military government, the constant fighting can make for strange alliances. Such is the case for the man known only as the Masked, the victim of a magical curse that forces him to hide his face, and an escaped halfling slave woman named Tantaerra.

Thrown together by chance, the two fugitives find themselves conscripted by both sides of the conflict and forced to search for a magical artifact that could help shift the balance of power and end the bloodshed for good. But in order to survive, the thieves will first need to learn to the one thing none of their adventures have taught them: how to trust each other. 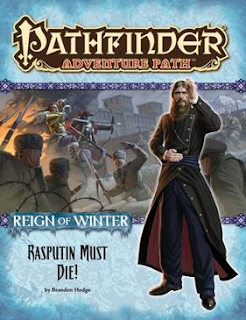 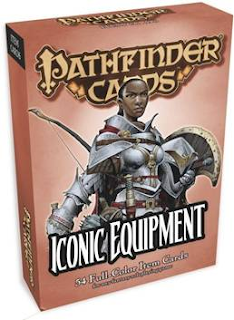 The search for the Queen of Witches finally ends when the Dancing Hut travels to Baba Yaga’s homeland of Russia on the planet Earth. The year is 1918, and the First World War rages throughout Europe. The heroes find themselves in the wilds of Siberia, where they must face Russian soldiers armed with 20th-century technology, infiltrate an ancient monastery and rescue Baba Yaga from her estranged son, Grigori Rasputin. Can the heroes kill the “Mad Monk,” who has already cheated death once before, and free Baba Yaga, or will they too fall before the horrors of modern war?

“Rasputin Must Die!” is a Pathfinder Roleplaying Game adventure for 13th-level characters. This volume continues the Reign of Winter Adventure Path, and includes details on the soul-harvesting worship of the daemonic Horseman of War, new rules for World War I-era weapons and equipment, and a new occult oracle mystery based on 20th century mysticism! 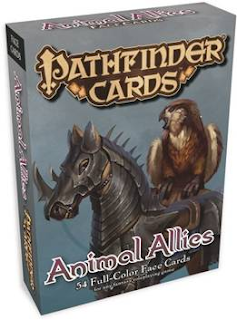 Animal companions and familiars are more than just servants, they’re some of the most deadly, versatile, and effective allies in the Pathfinder RPG. Give your most devoted companions the prominence they deserve with Pathfinder Face Cards: Animal Allies.

A collection of more than 50 gorgeously illustrated cards depicting the most common animals in the Pathfinder RPG, but suitable for use in any fantasy roleplaying game! Each card includes the space to record key details and artwork by Paizo’s finest illustrators. These cards bring your animal associates to center stage and assure that you never forget your most capable companion again! 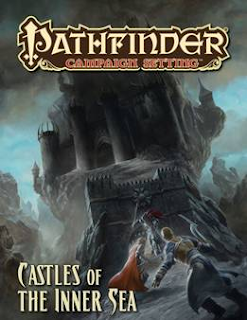 Across the Inner Sea rise intimidating fortresses, monuments of power and redoubts of orders both valorous and villainous. From edifices that have withstood countless sieges to the imposing ruins of those conquered, castles and their remains serve as the ultimate power centers for some of Golarion’s most potent and deadly forces.

Pathfinder Campaign Setting: Castles of the Inner Sea provides a detailed overview of six of Golarion’s most storied citadels, bastions that might serve as the setting of entire adventures, homes to allies and enemies, or the headquarters of the land’s most capable adventurers. Each features elaborate overview maps and detailed descriptions of the most noteworthy floors, structures, or dungeons. Famous and infamous castles explored in this 64-page book include: Castle Everstand, a magically created bastion of heroic knights that protects Lastwall from endless tides of rampaging orcs.

Pathfinder Campaign Setting: Castles of the Inner Sea is intended for use with the Pathfinder Roleplaying Game and the Pathfinder campaign setting, but can easily be used in any fantasy game setting. 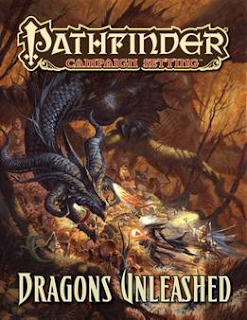 Dragons invade the world of the Pathfinder RPG in Pathfinder Campaign Setting: Dragons Unleashed! This collection of deadly foes and potent allies reveals 15 of Golarion’s most powerful and influential dragons, from cunning draconic manipulators to great wyrms capable of testing even the most experienced adventurers. Dragons of every chromatic and metallic breed fill this collection, along with mysterious primal dragons and regal imperial dragons.

Each entry includes full statistics for running the dragon, details on its history and ambitions, ways to use the dragon in an ongoing campaign, descriptions and maps of the dragon’s lair, the contents of its vast hoard, and more. 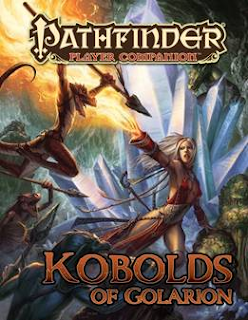 Deceitful, daring, and diminutive, kobolds, those infamous deep-dwelling denizens of the Darklands, creep into your campaign with Pathfinder Player Companion: Kobolds of Golarion.

Learn the dastardly ways and sinister secrets of the kobolds of the Pathfinder Campaign Setting, including where they live, how they fight, and their insidious designs on the world above. Discover the secrets of these insidious trap builders, the powers of their ancient draconic heritages, and the mysteries of alchemy and arcana that allow these miniature menaces to flourish in the darkened depths. Use these secrets to get the edge on kobold foes, or turn them against your own enemies with new options for playing your own kobold characters.

Goblins aren’t the only half-­sized horrors in Golarion, unleash the unpredictable cunning of kobolds with Pathfinder Player Companion: Kobolds of Golarion! 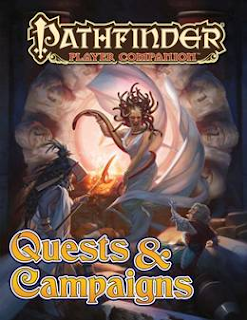 Experience the Pathfinder Campaign Setting as you never have before: as a native! Construct a background for your character that puts you in touch with the races, history, and conflicts of the Inner Sea Region, that sets you on the path toward adventures of personal relevance, and that offers benefits based on a variety of lifelong quests. Or go beyond your character’s history and look toward the future by taking up arms against some of Golarion’s greatest threats and continuing challenges with a host of world-specific story feats.

Adventuring rulers will also find new structures to construct within their cities and armies to raise under their banners, expanding upon the kingdom building rules and other exciting new options from Ultimate Campaign. New spells, magic items, feats, and more also help put you in control of your character’s fate like never before.

Let Pathfinder Player Companion: Quests & Campaigns set you on the course of not just deciding your character’s fate, but that of the entire Inner Sea Region!

Posted by ACD Distribution at 4:45 PM