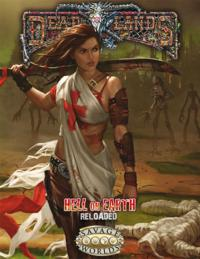 The end isn’t nigh—it’s past! Welcome to Hell on Earth Reloaded, the dark future of the strange past of Deadlands. The year is 2097, but the future is not our own. The long Cold War between the United and Confederate States of America finally came to an end—in world-wide hellfire. The rain of ghost rock bombs shattered most anything man could call civilization, cracked the space between this world and the next wide open, and birthed a true Hell on Earth. But that was 16 years ago, and we’ve done the one thing we’re pretty good at—survive in spite of ourselves. Sure, some folks have some extra limbs, you’re likely to get killed for the scraps in your pocket, and everything east of the Mississippi is overrun with a crazed army of undead, but what other option do you have? Join us in this dark future, where what remains cries out for new heroes while hiding from old—even ancient—villains. Has your body been wracked by the constant radiation exposure, or have you learned to channel the lingering power of the atom to your will? Remake the world as you wish. Hell, you can’t make it any worse… Hell on Earth Reloaded contains everything you need to run endless adventures in the post-apocalyptic Wasted West with the Savage Worlds game system: new Edges, Hindrances, new Arcane Backgrounds, copious information about the various locales, races, and mysteries of the Wasted West, and dozens of creatures and nefarious foes. Hell on Earth Reloaded requires the Savage Worlds core rulebook to play. 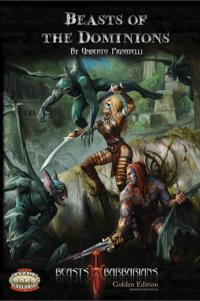 The mysterious Moloke-tanu hunting in the tall grass of the Ivory Savannah… The Yellowfingers lurking in the darkest tombs of the Cairnlands… The Yarakan, or Great Devourers, dreaming memories of a fallen empire… Ten monsters of the Dread Sea Dominions, each with a dedicated Savage Tale, await you within. In addition, a Player Appendix to let you play the dreaded Disciples of the Black Temple! Grab your battleaxe, ready your bow, and prepare to face the Creatures of the Dread Sea Dominions! This book presents ten monsters and NPCs typical of the Dread Sea Dominions, complete with stats, descriptions, and a complete Heroic Tale you can use as a stand-alone adventure, or customize to fit your campaign. The scenarios are designed for a party of 4–6 Seasoned heroes, but you can alter them for more experienced groups. They can be played in any order, though some tales work better in the given sequence (check each tale’s Requirements). Each scenario also includes a Hook, which you can use as inspiration for your own stories as well. Each group of foes is based in a different area of the Dominions and evenly distributed across the lands, giving your party opposition in each major nation of the setting. However, you can relocate them to countries work better for your campaign. In addition you find an Appendix, dedicated to players, to play the mysterious Disciples of the Black Temple, a sect of dark sorcerers with an even darker master. To use this compendium you need copies of the Savage Worlds and Beasts and Barbarians rulebooks.
Posted by ACD Distribution at 9:30 AM