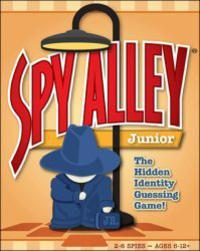 Spy Alley Junior is a fun and fast paced game of hidden identities. Each player assumes the identity on their Spy Identification card. The players use the die and their move cards to move their tokens around the game board. If a player lands on the same colored guess space as one of their opponents, they may guess their opponents' identity. If they are correct, their opponent is eliminated from the game. One key to the game is knowing when to use your move cards. Another is using your memory skills to expose the other spies. 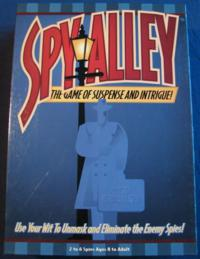 From Mata Hari to James Bond, spies and secret agents have filled our imaginations. Now, you get the chance to play spy and counter spy in a dark alley - SPY ALLEY Deceptively simple and surprisingly intense, Spy Alley keeps you on the edge of your seat. Players become a spy for their given country and try to uncover their opponents' identity while keeping their own identity a secret. Players use deductive reasoning to expose other spies while attempting to complete their mission by obtaining code books, disguises, keys, and passwords. You will be surprised how difficult it is to deceive your friends and family. A slip of the tongue, the blink of an eye, or even the twitch of a muscle may give your identity away. 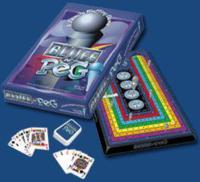 Modeled after the old Wild West style of card playing, Bluff 'N' Peg recreates the excitement of 5 Card Draw without the gambling; turning an old saloon game into a game the whole family can play. Imagine being in the old Wild West with Wyatt Earp and Billy the Kid, as Bluff 'N' Peg take you back to a time when bluffing in a card game was a way of life. The strategy is knowing how to play your cards. Starting with 5 cards, each player in turn must play 1 card at a time until they have beaten the best hand showing or they may fold their cards. By folding you can minimize the number of holes you are forced to peg backward. Knowing when to double and when to fold is the key to the game. 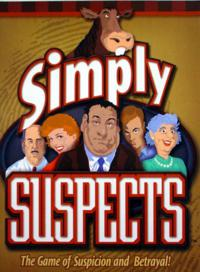 In society, whenever a crime has been committed, no matter how small, there is always evidence left behind. The evidence usually points to certain suspects. In this game, the players are all "simply suspects." What is unusual is that the suspects each have the opportunity to tamper with the evidence so that it points to other suspects. If the evidence points to you when you meet the Grand Jury, you are eliminated from the game. Simply Suspects is a fast-action game of suspicion and finger pointing. Much like Spy Alley, Simply Suspects is deceptively simple yet surprisingly intense. The advantage that one player may appear to have can change with a single move. You are never sure which suspect will escape the Grand Jury and win the game.
Posted by ACD Distribution at 1:30 PM