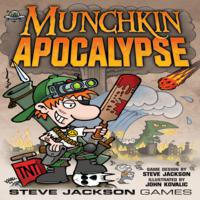 In Munchkin Apocalypse, every possible natural (and unnatural) disaster has happened. You are a rugged survivor in a world full of people – and things – that want to kill you and take your stuff. So do it to them first! And what's with all these seals running around? Don't they know the world's about to end? You should keep an eye on that seventh one in particular . . . Tell the Players • Kill the monsters, take their stuff, and survive the end of the world. • A new card type: Disasters! You want them to happen to the other players. • Just to keep things interesting, there's an alternate victory condition! 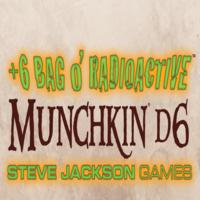 These are 6-siders, and there are six in the package. Three of them match the Munchkin Apocalypse die. The other three do not. They are scary green and orange. They have the Munchkin head in place of the 1. Your customers will buy them so they can kill monsters and take their stuff. Tell the Players • You can never have too many dice! Half of them match the Munchkin Apocalypse die. The others are the same colors in reverse. • They actually work with other games, but why would you play anything else? • It’s Munchkin. It’s dice. What more do you need to know?
Posted by ACD Distribution at 1:00 PM