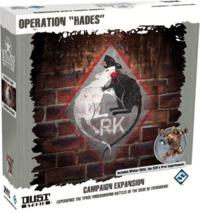 The fifth campaign expansion for Dust Tactics, Operation “Hades” permits dynamic new play experiences. It introduces rules for subterranean warfare, superhuman soldiers, new skills, and richly detailed information about the city and battleground of Zverograd. It also offers players thirty-one tiles, a Zverograd city poster, a map of the Zverograd metro, six scenarios, and over two dozen objectives to serve as the basis of their own scenarios. Finally, Operation “Hades” marks the arrival of Winter Child, the game’s first superhuman soldier.

Key Selling Points • The fifth campaign expansion for Dust Tactics • Introduces new rules for tense and dramatic underground fighting • Brings to life the war-torn city of Zverograd, the campaign’s setting • Offers six new scenarios and presents players with tools to build their own • Marks the arrival of Winter Child, the game’s first superhuman 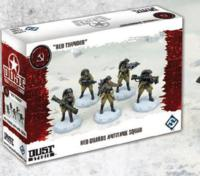 The SSU infantry responds to the threat of Axis and Allied walkers with the Red Guards Anti-Tank Squad. These anti-tank specialists come equipped with two PTRS-47 bazookas, each capable of punching a hole through even the most heavily armored walkers. Adding some spine and versatility to any Dust Tactics SSU army, this unit makes a natural target for the addition of a strong anti-tank hero, or commissar, or both! 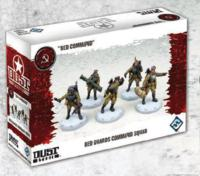 Long behind the Axis and Allies in VK technology and combat walkers, the SSU army of Dust Tactics has relied on the strength of its infantry to endure the war. Accordingly, though the Red Guards Command Squad offers SSU players all the standard Command Squad skills, allowing them to reactivate your other units, call in artillery strikes, and help coordinate your attacks, these stalwart veterans arrive at the battlefield better armed than their Axis and Allied counterparts. This squad means business! 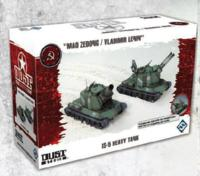 With less access to VK-driven technologies, SSU engineers have had to invent other means to combat the powerful walkers deployed by their Axis and Allied foes. Their response? The IS-5 Heavy Tank comes equipped with serious SSU firepower in both possible configurations. The Mao Zedong controls a battlefield at range with its Quad 85 mm AA Gun, and the Vladimir Lenin is a powerful artillery platform. Both are Damage Resilient and can carry infantry squads across the battlefield.

Key Selling Points • The first SSU heavy tank • Adds serious firepower to any SSU army • Can be configured as either the “Mao Zedong” or “Vladimir Lenin” • Damage resilient hull stands firm against most attacks • Infantry squads can ride the IS-5 Heavy Tank, offering it further protection