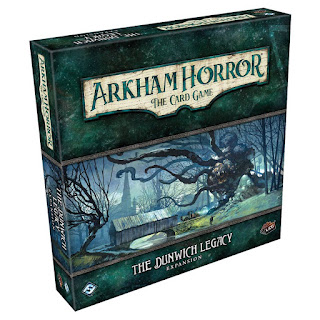 "No one, even those who have the facts concerning the recent horror, can say just what is the matter with Dunwich..."-H. P. Lovecraft, The Dunwich Horror
Several months ago, three Miskatonic University professors armed themselves with secret knowledge, traveled to Dunwich, and brought an end to the strange and terrifying creature that had been terrorizing the secluded village. Now their story continues in The Dunwich Legacy expansion for Arkham Horror: The Card Game.

Your mentor, Dr. Armitage, was one of those three professors. When his colleagues go missing, he fears the worst and asks for your help. With its five mini cards and 156 full-size cards, The Dunwich Legacy challenges you to find the missing professors, launching you into a campaign that leads to Miskatonic University, the notorious Clover Club, and beyond.

Five new investigators arrive to offer their services, and you can arm them with fifty-nine new player cards (including a complete playset of each). Pursue new deck-building strategies and new styles of play. You'll need all the help you can get as you play the expansion's two scenarios and encounter all manner of new terrors - from backroom thugs and bad luck to arcane hexes and wholly unnatural abominations. 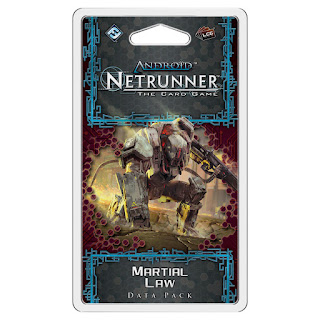 Young climbed into his exosuit and glared at the two people in the squad he was most worried about. One of them was the EWS embed, a Sergeant named Braid who spent more time jacked in than he did in his own body. The other wasn't even a person...

Martial Law is the fifth and penultimate Data Pack in the Flashpoint Cycle for Android: Netrunner, and it advances our understanding of how deeply New Angeles has plunged into chaos. Its citizens are trapped in their arcologies or huddled together in whatever safe places they can find. The city's streets have become a warzone. The corps can't or won't restore order.

The time has come for the U.S. government to intervene.

Shock and awe are the order of the day in Martial Law. Starting with two new neutral currents, one each for Runner and Corp, the expansion's sixty new cards (three copies each of twenty different cards) are going to bring a new order to the world's largest city-one way or another. But when this new order is established, who will be viewed as the winners? And what will they have gained? 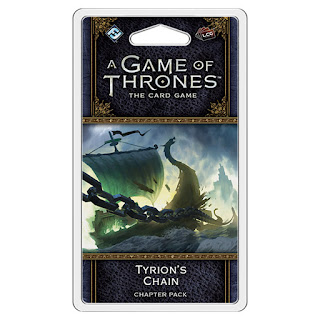 Davos could make out the striped hulls of Salladhor Saan's ships beyond, but he knew he would never reach them. A wall of red-hot steel, blazing wood, and swirling green flame stretched before him. The mouth of the Blackwater Rush had turned into the mouth of hell.
-George R.R. Martin, A Clash of Kings

The War of the Five Kings has reached its tipping point. Stannis Baratheon marches on King's Landing by land and by sea, sending his powerful navy up the Blackwater Rush to seal off any escape. Tywin Lannister moves south with all speed, leaving the north to House Stark and House Greyjoy, but his mighty armies will never arrive before the city is besieged. In the end, the man who sits the Iron Throne at the end of the battle may be determined by nothing more than the ingenuity of Tyrion Lannister's defenses.

With the Tyrion's Chain Chapter Pack for A Game of Thrones: The Card Game, the War of Five Kings cycle approaches its dramatic conclusion. Here, you'll find plenty of new support for Summer and Winter decks, inviting you to draw your strength from the warm zephyrs of summertime or the howling gales of winter. As the final chapters of A Clash of Kings play out in the card game, you'll also find iconic characters entering the game for the first time, including Qhorin Halfhand, Salladhor Saan, Podrick Payne, and Ser Arys Oakheart. It's time for you to rally behind your King and enter one of the greatest battles in the game of thrones! 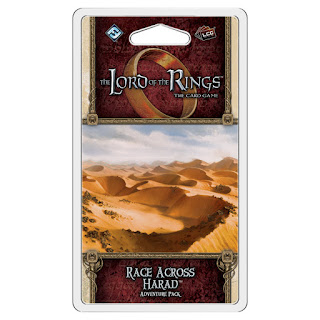 "Where the warg howls, there also the orc prowls."
-Aragorn, The Fellowship of the Ring

Race Across Harad is the second Adventure Pack in the Haradrim cycle for The Lord of the Rings: The Card Game.

After a small band of Middle-earth's greatest heroes capture and tame some oliphaunts to help carry them out of Harad, the new scenario in Race Across Harad pits them against the pack of wargs and their riders who arrive hard upon their heels. Even while their towering oliphaunts may give the heroes an early advantage, the heroes know they cannot ignore the warg-riders and their barbed arrows. Instead, their only hope is to quicken their pace and ride for the Ford of Harnen where their massive oliphaunts might be able to crash through waters too deep for the wargs to cross...

Meanwhile, even as the scenario from Race Across Harad brings this frantic chase to life, it enhances your deck-building options with a new Dúnedain hero, plus three copies each of nine different player cards. These enhance a wide range of the game's existing keywords, Traits, and mechanics. You'll find support for everything from Mounts to side quests and from the Doomed keyword to the cycle's new focus on events that offer powerful rewards when you can target specific pairs of Traits.
This is not a standalone product. Requires a copy of The Lord of the Rings: The Card Game Core Set and The Sands of Harad deluxe expansion to play.
Posted by ACD Distribution at 4:52 PM