Retailers! Stock up for the holidays with this promotion from SET! 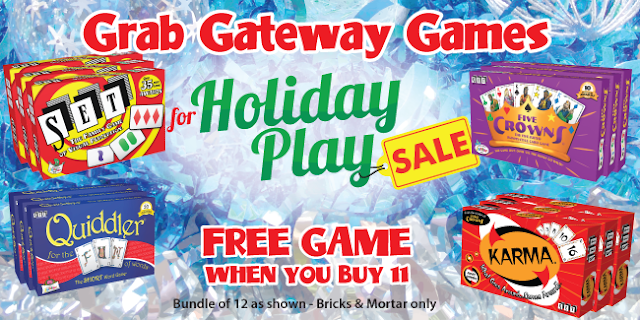 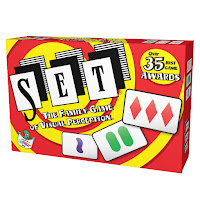 SET, The Family Game of Visual Perception, has won over 35 best game awards including MENSA Select. SET is a board game where any table becomes your board! It's a perfect travel game and a party favorite! Race to find a SET of three cards where each feature is either all the same or all different on each card. With no turns and no luck, SET is challenging, fast and fun! It makes a perfect after dinner game that can be played in only 20 minutes. SET can be played alone or with as many players as you can fit around the table! 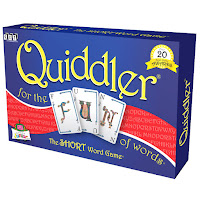 Quiddler is a delightful challenge for rookies and wordsmiths alike. There are two bonuses each round: one for the longest word and one for the most words! The object is to arrange all the cards in your hand into one or more words. There are 8 rounds per game. Start with 3 cards in the first round, 4 cards in the second round, on up to 10 cards in the last round. Players draw and discard until someone forms their entire hand into words using two or more cards per word. Once a player goes out, everyone else gets one last chance to draw and put down the words they have made. Quiddler is called 'The SHORT Word Game' because readers of all ages can play and win with short words like 'at', 'is' and 'the'. You can even use a dictionary when it's not your turn. Try to use your high point letters, but don't get caught with them in your hand! 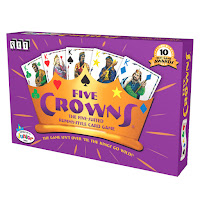 Five Crowns is a five-suited rummy-style card game played in eleven rounds. It is a quick favorite for avid and casual card players alike. Five Crowns features a unique double deck that contains 5 suits (the stars are new) providing each player multiple options for arranging their hand into books and runs. The wild card changes each round keeping you on your toes. It starts with 3 cards and 3s are wild, next round has 4 cards and 4s are wild and so on 'til the Kings Go Wild! Make the right combinations, be the first to go out, then watch the others scramble as they get one last chance to cut their losses.

SET9000
KARMA: What Goes Around Comes Around! 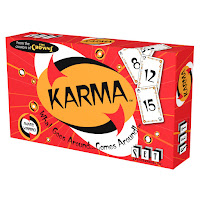 Karma is playfully competitive and infectiously fun! Race to get rid of all your cards by playing a card of equal or higher value. Use your Karma Cards to avoid picking up the discard pile. In this game there are multiple winners. You never really know who's going to lose until the very last card—the dramatic ending calls for an instant rematch! There are 4 types of Karma Cards in the game.  You can play them like wild cards, but be sure to use them wisely because in this game...What Goes Around...Comes Around! Friends and families agree that Karma is a blast! You can never play just one game. Having a party? Combine two games and play with up to 12 people.